Biography of Most Rev. Earl Boyea, Bishop of Lansing

Earl Boyea was born April 10, 1951 in Pontiac, Michigan, as the eldest of the ten children of Earl and Helen Boyea.  He was raised in Waterford and attended Our Lady of the Lakes Church and the parish school from third through eighth grades.  He studied at Sacred Heart Seminary High School and College from 1965 to 1973, obtaining his Bachelor's degree in History. He studied at the Pontifical North American College and Pontifical Gregorian University (1973–1977) in Rome, earning his Bachelor's degree in Sacred Theology from the latter in 1976.

He was ordained to the priesthood by Bishop Joseph Imesch on May 20, 1978, while serving as a deacon at St. Benedict Church in Pontiac.  Father Boyea served as associate pastor of St. Michael the Archangel Parish, Monroe, Michigan until 1979, and then returned to the Gregorian in Rome, from where he obtained his Licentiate in Sacred Theology in 1980, with a thesis entitled: "Christology in Galatians". Upon his return to the United States, Father Boyea was associate pastor of St. Timothy Parish in Trenton until 1984, whence he earned his Master's in American History from Wayne State University, with a thesis entitled: "John Samuel Foley, third bishop of Detroit: His Ecclesiastical Conflicts in the Diocese of Detroit, 1888–1900."

In 1986, he was named temporary administrator of St. Christine Parish in Detroit.  Father Boyea obtained his PhD in Church History from the Catholic University of America in Washington, D.C. in 1987 and served as a weekend assistant at St. Joseph Parish in Lake Orion (1987–1988), Holy Family Parish in Novi (1988–1990), and Sacred Heart Parish in Auburn Hills (1990–1999). From 1988 to 1999, he also was the chaplain of Camp Sancta Maria a Catholic boys' summer camp in Gaylord, Michigan.

Father Boyea sat on the Detroit Archdiocesan Presbyteral Council from 1990 to 1991 and the Academic Concerns Committee of Madonna University's Board of Trustees from 1994 to 2000. From 1987 to 2000, he taught Church History and Scripture at Sacred Heart Major Seminary in Detroit, which he became dean of Studies in 1990. Father Boyea was raised to the rank of Honorary Prelate of His Holiness on Jan. 18, 2000, with the title of monsignor. He was a weekend assistant at St. Mary Parish in German Village, Ohio (2001–2002) while concurrently serving as the rector-president and a professor at the Pontifical College Josephinum in Columbus. A prolific author, he also was made editor of the North Central Association Self-Study Report in 1994, of the United States Catholic Conference Self-Study Report in 1995, of the Association of Theological Schools Self-Study Report in 1996, and of the National Conference of Catholic Bishops' Seminary Visitation Report in 1998.

On July 22, 2002, Msgr. Boyea was appointed auxiliary bishop of Detroit and titular bishop of Siccenna by Pope John Paul II. He received his episcopal consecration on the following Sept. 13 from Cardinal Adam Maida, with Archbishop Timothy P. Broglio and Bishop Thomas Joseph Tobin serving as co-consecrators. During his tenure as an auxiliary, Bishop Boyea served as regional bishop for the South Region (2002–2003) and for the Northeast Region (2003–2008) of the archdiocese.

Pope Benedict XVI named him the fifth bishop of Lansing on Feb. 27, 2008.  Bishop Boyea was formally installed as Lansing's ordinary on April 29, 2008.

Bishop Boyea currently serves as the episcopal moderator of the United States Association of Consecrated Virgin and on the Board of Directors of the Michigan Catholic Conference. Within the United States Conference of Catholic Bishops, he sits on the Committee on Clergy, Consecrated Life and Vocations, having formerly sat on the Committee on Boundaries of Dioceses and Provinces and on Priestly Formation and Committee on Selection of Bishops.  Bishop Boyea also belongs to the Catholic Biblical Association, Fellowship of Catholic Scholars and American Catholic Historical Association. 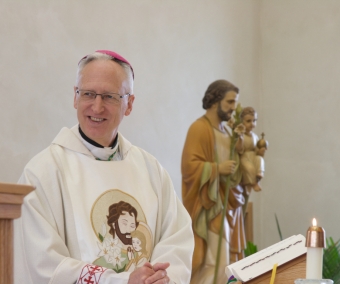