Bishop Carl F. Mengeling was born Oct. 22, 1930 in Hammond Indiana, the son of Carl H. and Augusta Huke Mengeling, who were both German immigrants. He was the second of four children. At the age of nine, Bishop Mengeling was baptized a Catholic. Until  that time, he had been raised in the Lutheran tradition. He attended St. Mary Elementary School in Griffith, Indiana; graduated from Griffith High School in 1948 and attended St. Meinrad College and Seminary in St. Meinrad, Indiana, staffed by the Benedictines.

He was ordained a priest by Bishop Andrew G. Grutka on May 25, 1957 at the Cathedral of the Holy Angels in Gary, Indiana. This was the first ordination class of the newly formed Diocese of Gary. He served as the associate pastor of St. Mark Parish, Gary, from 1957-1961, then the largest parish in the diocese. He then was sent to Rome for advanced studies. Father Mengeling received a License in Sacred Theology at the Angelicum University and a Doctorate in Sacred Theology at Alfonsianum Academy. He was in Rome for the opening of the Second Vatican Council and served as a page during some council sessions.

Upon his return to the United States in 1964, Father Mengeling was assigned to teach at Bishop Noll High School in Hammond, St. Joseph Calumet College in East Chicago, Indiana and St. Procopius Seminary in Lisle, Illinois.

He returned to full-time parish work serving as pastor of All Saints Parish in Hammond from 1968-1970, Holy Name Parish in Cedar Lake from 1970-1971, Nativity of Our Savior in Portage 1971-1985 and St. Thomas More Parish in Munster 1985-1995. He was named monsignor in June 1984. His involvement in the Gary Diocese included chairing the diocesan Worship Commission and the Vocations Committee. He founded the diocesan Institute of Religion and chaired it for fourteen years. He also served on the Presbyteral Council, the Ecumenical Commission and the Permanent Diaconate Formation team.

Bishop Mengeling chose the words of St. John the Baptist as his episcopal motto “He must increase!” (John 3:30). During his years as bishop of Lansing, he has sought to increase his flock’s awareness of Jesus Christ. A repeated theme of his preaching is that we must be “on fire” with love for God and our neighbor.

During his first years in Lansing, he focused on the implementation of Pope John Paul the Great’s apostolic letter Tertio Millennio Adveniente to prepare the entire diocese for the third millennium of Christianity. A Jubilee 2000 Commission was established to coordinate four years of activities. Bishop Mengeling presided at regional Celebrations of God’s Forgiveness in 1999 and was part of the preaching team for the regional missions in 2000. Bishop Mengeling led pilgrimages to the Shrine of the Immaculate Conception in Washington, D.C. and to Our Lady of Guadalupe in Mexico City.

An outgrowth of the millennium preparations was the creation of the Office of Pastoral Planning in October 1999. The diocesan strategic planning process entitled “Voices” was conducted in 2000 and 2001, the resulting goals were announced at the Common Conference in November 2001, and a pastoral plan was promulgated at the Chrism Mass in March 2002. The reorganization of central services also resulted from this process.

The nationally award winning magazine Faith was instituted in January 2000 as a means to help people deepen their faith in Jesus Christ and to build his body the Church. As a Jubilee 2000 gift from the diocese, each Catholic household in the diocese received a one year free subscription. Bishop Mengeling has been a regular contributor to the magazine.

Convinced of the importance of ministry to youth, Bishop Mengeling met in 1999 with the Knights of Columbus leadership in the diocese and shared his vision for a special center for youth on the campus of St. Francis Retreat Center in DeWitt. Bishop Mengeling presided at the blessing of Bethany House on the diocesan feast day, Dec. 8, 2001.

Bishop Mengeling has had to face some difficult times as bishop. In 2000 a revised sexual abuse policy was put in place by the diocese ahead of the national sexual abuse scandal of 2002. In response to this tragedy, the bishop instituted in 2003 the Virtus program as part of an effort to create a safe environment for the protection of our children and young people. He also has been part of the healing retreats offered at St. Francis Retreat Center for victims of sexual abuse.

Vocations always have been a priority of Bishop Mengeling. He encouraged the development of the Catholic Identity and Mission Campaign in 2005. He has commissioned 96 lay ecclesial ministers,ordained 33 priest and 43 permanent deacons. Bishop Mengeling has presided at the first final profession ceremonies for communities of women religious of the Servants of God’s Love and Sisters of Mary, Mother of the Eucharist. Each year, he has met with the prioress of the Adrian Dominicans and her council. At the national level, he served for a number of years in the United States Conference of Catholic Bishops committees on the permanent diaconate and priestly formation and the subcommittee on campus ministry.

As an educator and a pastor, He has been a strong supporter of Catholic schools. As pastor of Nativity of our Savior Parish in Portage, Indiana, in the 1970's, he built a school before building a church. Bishop Mengeling brought this enthusiasm for Catholic schools to Lansing. As a result of the Voices process, he has worked with pastors, staffs and education commissions to make Catholic schools more accessible, available and affordable. During his episcopacy, the new Father Gabriel Richard High School in Ann Arbor was built. Bishop Mengeling has appointed priest chaplains to all four diocesan high schools to ensure a solid Catholic identity and a deepened spiritual life.

When the Hispanic parishes in Lansing and Flint opened their facilities, he joined in their celebrations. The Vietnamese community was excited when Bishop Mengeling created their parish in 1998. Bishop Mengeling joined the Black Catholic Community in rejoicing at the opening of their new church, in Flint, in 2002. That same year, diocesan staff helped coordinate the hosting of the Tekakwitha Conference, a nationwide gathering of Native American Catholics at Michigan State University; Bishop Mengeling presided at one of the liturgies.

Bishop Mengeling has reached out to minorities and groups often forgotten in our society. He has celebrated Mass for inmates in county, state and federal facilities. He frequently has gone to the migrant camps to celebrate Mass with farm laborers.

All his efforts have come from a heart full of love for God and a desire that others come to love the Lord. Since his ordination as our bishop in 1996, Bishop Mengeling has lived the exhortation spoken to him by Cardinal Maida when the crosier was presented.

“Keep watch over the whole flock
in which the Holy Spirit has appointed you
to shepherd the Church of God.” 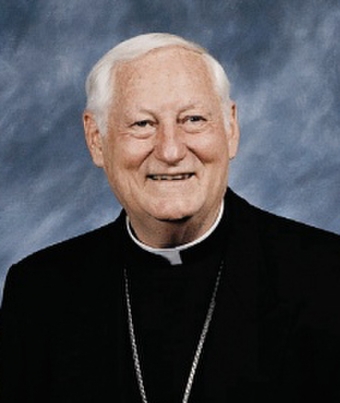