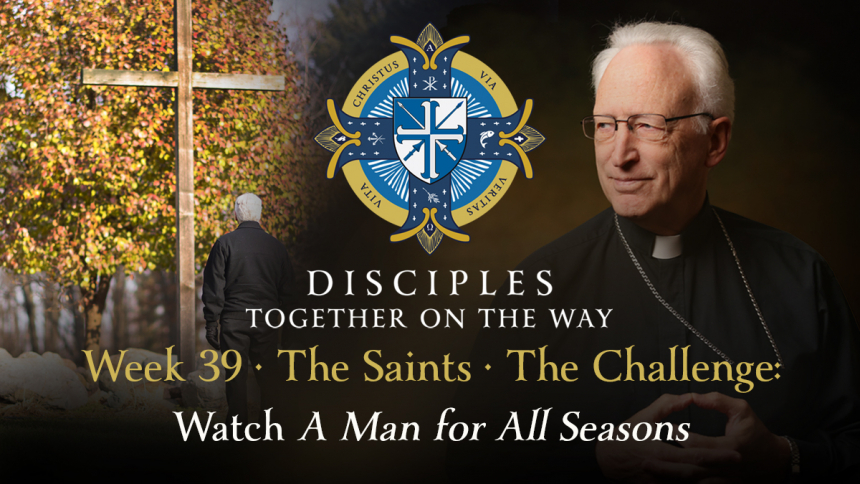 My sisters and brothers in the Lord,

This week we begin a new theme as Disciples Together on the Way: the Saints. Those who have followed in the footsteps of Christ and by his grace have made their lives holy and carried out the mission the Father entrusted to them. This, my friends, is a call for all of us!

In Genesis, at the dawn of creation, God, seeing that all he had created was good, saw that it was beautiful as well. Truth, beauty, and goodness. These three transcendentals, as they are known, are common to everything that exists. They also speak to our ultimate desire. The Catechism of the Catholic Church teaches that “All creatures bear a certain resemblance to God, most especially man, created in the image and likeness of God. The manifold perfections of creatures - their truth, their goodness, their beauty, all reflect the infinite perfection of God.” (CCC 41)

We sometimes say that the work of artists is “inspired,” not in the technical sense of divine revelation, but in that it is animated by creativity, which is itself a gift from God. Throughout history, the Church has celebrated this artistic inspiration, from the glories of the Sistine Chapel in Rome to timeless works of sacred music; from the great cathedrals to enduring works of sculpture, painting, and literature. Even when, at times, the Church and contemporary culture seem to be worlds apart from each other, the arts still form a kind of bridge to religious experience.

Of course, not all of us are called to be professional artists, yet, as Genesis has it, all men and women are entrusted with the task of crafting their life into a work of art: the masterpiece that God has designed. In this project, the saints are our best guides.

In the early 1960s, the English playwright Robert Bolt, though himself not a Catholic, found a wealth of creative inspiration in the character of Saint Thomas More, the great 16th century English statesman who served King Henry VIII as Lord High Chancellor of England. Indeed, it was More’s refusal to acquiesce to the King’s attempt to divorce his wife, marry his mistress and declare himself the head of the Church in England that led to Saint Thomas’ execution in 1532. Among his final words: “I die the King's good servant, and God's first”.

In the preface to his play about the life and death of Saint Thomas More, A Man for All Seasons, Bolt reflected: “What first attracted me was a person who could not be accused of any incapacity for life, who indeed seized life in great variety and almost greedy quantities, who nevertheless found something in himself without which life was valueless and when that was denied him was able to grasp his death. For there can be no doubt … if, on any day up to that of his execution, he had been able to give public approval to King Henry’s marriage to Anne Boleyn, he could have gone on living. Unfortunately, his approval of the marriage was asked for in a form that required him to state that he believed what he did not believe, and required him to state it on oath.”

In his martyrdom, Saint Thomas More brought true faith to its highest expression. He did so with heroic cheerfulness and generosity. We might say he gave full rein to the Divine Artist working in and through him. Keeping God's law in particular situations can be difficult, extremely difficult, but it is never impossible. As believers, we always have before our eyes the spiritual horizon of hope, thanks to the help of divine grace. Thomas More lived this way throughout his public service, in his family life, and in his literary and historical studies. His example reminds us of our high calling, in every dimension of life, and regardless the cost, to be God’s servant first.

Robert Bolt’s play proved to be so popular that it was made into a movie which, in turn, swept the boards at the Oscars in 1967. The Shakespearian actor, Paul Schofield, plays a measured and virtuous Sir Thomas More while Robert Shaw portrays a King Henry VIII who is as impetuous as he is ill-tempered. It’s a great film.

Hence, for this week’s challenge, I invite you to watch A Man for All Seasons. I pray that it will inspire us all to confirm by our lives the faith we profess with our lips.

I’ll be back with another challenge [on the saints] next week.  Until then, may God bless you with His grace throughout this coming week, in the name of the Father and the Son and the Holy Spirit. Amen.

Yours in Christ,
+ Earl Boyea
Bishop of Lansing