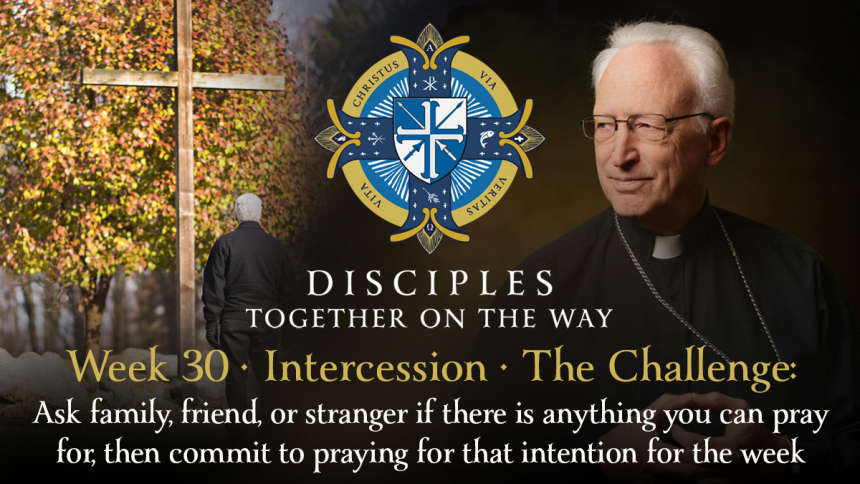 Dear Sisters and Brothers in the Lord,

As we’ve hopefully discovered over these past months as Disciples Together on the Way, a deep life of prayer is the wellspring of our life as Christians. The Gospels repeatedly remind us that Jesus himself always prayed before he acted. Prayer came first. As with Christ, so with us.

It goes on to say that “Since Abraham, intercession – asking on behalf of another—  has been characteristic of a heart attuned to God’s mercy.  As member of the Church, the Body of Christ, our intercession participates in Christ’s, as an expression of the communion of saints.” (CCC 2635)

What does it mean, though, to be attuned to God’s mercy? Does it mean that we cultivate mercy antennae, so-to-speak, that are always seeking places and situations for God to insert His mercy and calling His attention to those places? It’s not as if God NEEDS us to call His attention to anything. But God certainly wills us to do so and, by so doing, to participate in His saving work.

This mercy impulse brings divine dignity to our fallen human nature that so often seeks someone to blame or to highlight the bad and intolerable in people. It takes that negative perspective and changes it by opening our hearts to see that everyone is broken but also that everyone is a temple where God could dwell or dwell more supremely.  Thus we beg God to visit each temple we encounter with His mercy.

What does it mean that “Christian intercession participates in Christ’s”? On the Cross as well as throughout his life Jesus interceded for us with the Heavenly Father.  We who are baptized have been incorporated into Christ’s body — into His life and His mission.  So, Jesus is asking us to pray with Him from the Cross, for those people we encounter, for each other and for the world: “Father, forgive them, they do not know what they are doing.”

It is as if — when we intercede for someone — we are being vessels of God’s Divine Mercy, and Christ uses us to pour out that mercy — His mercy — into their lives.

So here is this week’s challenge: Ask a family member, a friend, or a stranger if there is anything you can pray for, then commit to praying for that intention for the week.

You may find it useful to start a prayer journal so that you can remind yourself of the intention each day and also note the insights and graces that God bestows upon your during your time of prayer.

Until next week: God bless you, in the name of the Father, and of the Son, and of the Holy Spirit.

Yours in Christ,
+ Earl Boyea
Bishop of Lansing