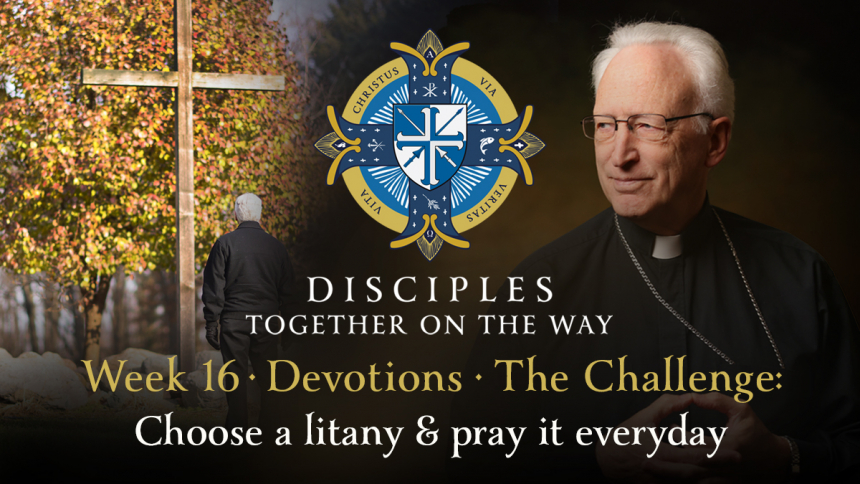 Dear Sisters and Brothers in the Lord,

I hope you have managed to renew your baptismal promises over the past few days. I also pray you found it helpful. This week I’d like to continue on the theme of Devotions with a particular focus on litanies. What’s a litany? A litany is a prayer that consists of a series of petitions which are, then, responded to in a recurring formula. For example, some of you may be familiar the Litany of Loreto which is often prayed after the recitation of the Holy Rosary. It consists of a long series of petitions to the Blessed Virgin Mary, the first three being: Holy Mary, pray for us; Holy Mother of God, pray for us. Holy Virgin of virgins, pray for us. You get the idea. That’s a litany. Hence, my challenge this week: Choose a litany and pray it every day as a household. Join me as I explain why this will be a good practice for Week 16 of Disciples Together on the Way.

Cardinal Francis Xavier Nguyen Van Thuan (1828 – 2002) was the South Vietnamese Archbishop of the capital city, Saigon, appointed on April the 24th, 1975. Six days later Saigon fell to the communist North Vietnamese Army. What followed for Archbishop Van Thuan was a swift arrest followed by 13 years in a re-education camp with nine of those years in solitary confinement.

“During those thirteen years,” wrote Cardinal Van Thuan, “I became aware of all my weaknesses, physical as well as mental. There were moments when I could not concentrate at all, when I could not even pray… days when I was not able to recite a single prayer.”

Reciting this litany helped him to pray when he couldn’t find the words, when his sighs were too deep for words (cf. Rom 8:26). Indeed, the Litany of the Saints became a prayer of liberation in part because it set his heart on the One who alone can save.

Sometimes we get the idea that litanies are repetitive and stifling, but if you’ve ever taken a long walk in the cool of a drizzling summer rain, then you know the power of the litany: it descends upon you slowly as you listen to the divine titles, names of saints, or petitions being invoked…one after another…and then, before long… you’re drenched in that rhythmic cadence — that prayer — and drawn up in hope.

For example, the aforementioned Litany of Loreto, invokes Mary under fifty-one titles: Seat of Wisdom, Ark of the Covenant, Gate of Heaven, Morning Star — to name a few. As this multitude of titles for Mary washes over us, we are swept up into meditation “on Mary’s person in order to grasp the spiritual riches which the Father’s love poured out in her.”  To bend the old saying of Gregory the Great, the litany offers “a kind of river… [of contemplation] which is both shallow and deep, in which a lamb may wade and an elephant can swim.”

There are many litanies, some approved for public use and others that are in common usage for private prayer. One of my personal favorites litanies is to the Sacred Heart of Jesus.

The challenge for this week is to choose a litany from the suggestions provided and pray one every day, as a household. Until next week, May God bless you the Father and the Son and the Holy Spirit. Amen.

P.S. Here is my list of ten suggested litanies for you to choose from: