Watch: The Seven Sorrows of the Blessed Virgin Mary w/ Bishop Boyea | At the Foot of the Cross 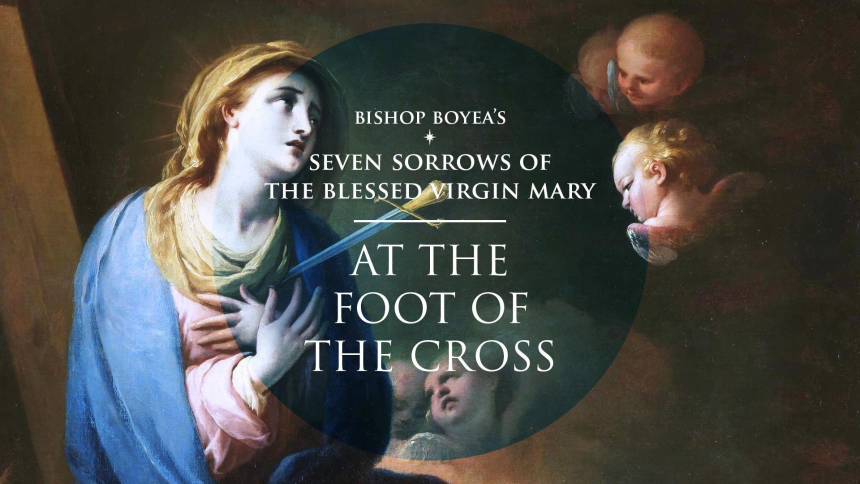 The motto of the Diocese of Lansing is Iuxta Crucem Iesu or, in English, By the Cross of Jesus. It is taken from Saint John’s eyewitness account of Our Lord’s Passion upon that first Good Friday:

"Now there stood by the cross of Jesus, his mother, and his mother's sister, Mary of Cleophas, and Mary Magdalen.” (John 19:25).

That's the scene which Bishop Boyea reflects upon today in the fifth of his meditations upon the Seven Sorrows of Mary. He says:

Back at the beginning of his public ministry, Jesus was faced with the very practical matter of a lack of wine. His mom told the stewards to do whatever he told them (John 2:5). She knew then and all throughout his ministry that the key to the spiritual life is to do what Jesus tells us. He is the Word of God and his word is thus salvation and life.

Now at the end of his life, Jesus continues to call Mary, “woman” not “mom.” Her role is much broader than that of his mother. She is the new Eve, the new woman, an image of the Church which Jesus will establish with his death and resurrection and the outpouring of the Holy Spirit. And from the cross, Jesus tells John that Mary is now his mother and Mary that John is now her son. “Do whatever he tells you.”

Jesus knows what he is saying. He is doing the Father’s will. In fact, he is the living and dying manifestation of that will. So, he knows best. Mary, even though there was pain in the separation implied by these words from the cross, knew they were the right words. She must have told John then, or perhaps she had repeated this countless times before, that John should do what Jesus said. And thus we are told, “And from that hour the disciple took her into his home” (John 19:27).

Jesus’ aunt, Mary’s sister, whom Jerome claims was Mary, the wife of Clopas, was also present to support her sister. So, at the foot of the cross we have the old family and the new family. Mary is part of both. There was no doubt a stab of sorrow at moving from the one, but a stab of joy in moving to the other.

Sisters and brothers, we all have family but it is not the most important family. Rather, the real family is the one we enter which was created by Jesus. He makes us brothers and sisters and gives us God as our Father and Mary as our mother. Every family has its sorrows. But in addition, in Christ, we have the joy of being made new in the Holy Spirit. In that, let us rejoice.