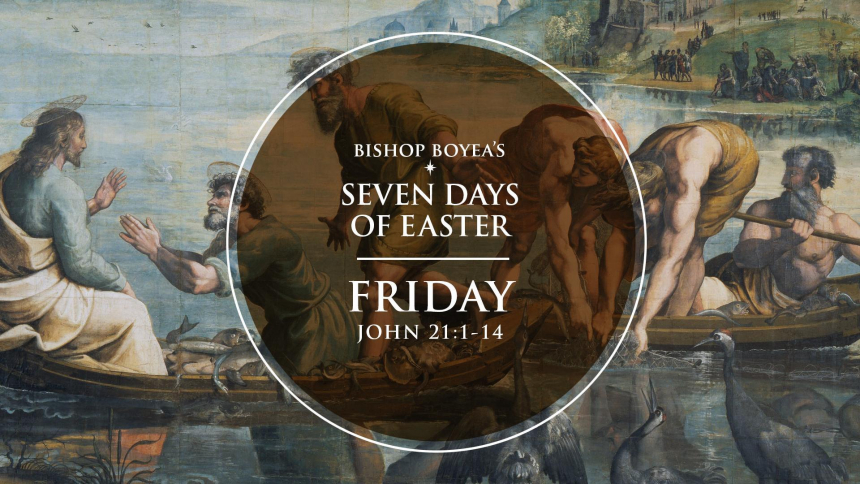 Today is Easter Friday. Today Jesus Christ reveals himself for a third time to his disciples, this time as they are fishing upon the Sea of Tibe'ri-as in Galilee (John 21:1-14).

"Why they had returned to fishing we don’t know," says Bishop Earl Boyea in his Easter Week reflection for today, April 9.

"But Jesus turned that activity into a mission.  By telling them to cast their nets yet again after a long fruitless night and by their subsequent large haul of fish, they knew that they were to be fishers for the Lord." The full text of Bishop Boyea's reflection for today is reproduced below:

Just as Mary Magdalene thought Jesus was a gardener when she first encountered him, so the seven disciples in their boat on the Sea of Galilee probably thought the stranger on the shore was just a hungry man.  It was the beloved disciple whose faith opened his eyes so that he could say, “It is the Lord” (John 21:7).

As we hear in this Gospel account for the Friday of Easter Week, the risen Lord was still instructing and forming these apostles.  Why they had returned to fishing we don’t know.  But Jesus turned that activity into a mission.  By telling them to cast their nets yet again after a long fruitless night and by their subsequent large haul of fish, they knew that they were to be fishers for the Lord.

Peter, seeing another charcoal fire, probably not unlike that in the courtyard of the high priest, the place of his denial of Jesus (John 18:18), did not hesitate to follow the Lord’s command and bring fish forward to cook.  And they all ate the bread and the fish which Jesus served them.  He was always serving them.  That was to be the model for their future lives.

The Resurrection did not mean the end of the mission for which Jesus was sent by the Father.  It meant, rather, a change in that mission.  For, now, that mission was to be carried out by these apostles.  Jesus knew they needed on-going formation, as it were, and that would be provided.  As Jesus said at the Last Supper, he was not abandoning them.  They would receive his abiding help through the Holy Spirit.

Sisters and brothers, even when we fear we are alone; even when we meet obstacles and seeming defeat; even then, the Lord is with us to sustain us and serve us and challenge us to move forward.  Notice that in this Gospel account the large number of fish did not break the net, something that should have happened as we saw in Luke’s Gospel (5:6).  Our mission may be stretching us and the work may see daunting, but Jesus is always with us to make sure that the net does not break.