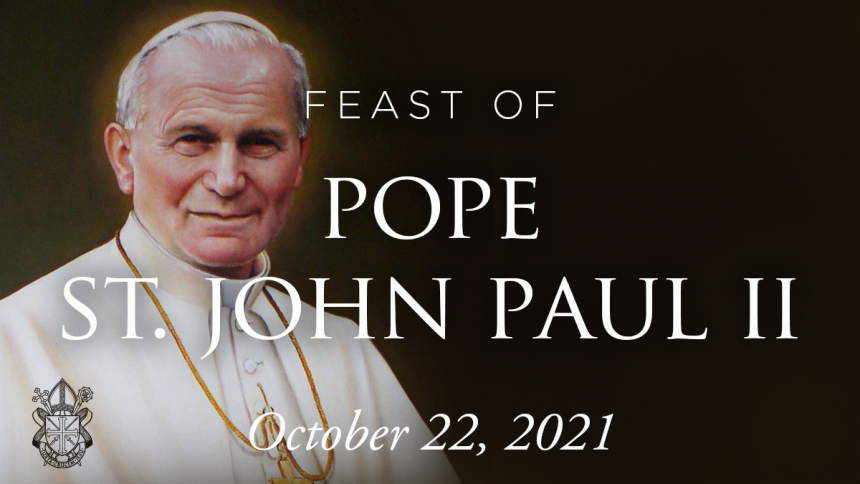 Today is the Feast of Pope Saint John Paul II. Happy feast day! It was on this day in 1978 that Cardinal Karol Wojtyla, Archbishop of Krakow in Poland, was inaugurated as the 264th Bishop of Rome. Over the next 27 years Pope Saint John Paul II reformed the Church and changed the world including hastening the collapse of communism across Eastern Europe. Pope Saint John Paul was also tireless in promoting a “Civilization of Love” based upon marriage and the family in the face of contemporary society’s “Culture of Death”.

“Pope Saint John Paul II continues to be a significant presence in the life of the Church because he saw very clearly that the family was key to the mission of the Church,” said Richard Budd, Director of Marriage & Family Life Ministry for the Diocese of Lansing, October 22.

“For Pope Saint John Paul, the family wasn't simply one more project of the Church. The family, really, was co-responsible for the mission of the Church. He famously said that the New Evangelization depends largely on the domestic church, which is the family.”

During his pontificate, Pope Saint John Paul II made 146 pastoral visits in Italy and, as the Bishop of Rome, he visited 317 of the current 322 Roman parishes. His international apostolic journeys numbered 104 and were expressions of the constant pastoral solicitude of the Successor of Peter for all the Churches.

This included a visit in September 1987 to Michigan. During his two day stay in Detroit, the Holy Father visited Blessed Sacrament Cathedral, the Ford Auditorium, the Hart Plaza, and the Pontiac Silverdome where he offered Holy Mass. Polish-born John Paul II made a special visit to the Polish-American community of Hamtramck as part of his long-standing tradition of supporting Poles at home and abroad. In total, he visited the United States seven times.

His principal documents include 14 Encyclicals, 15 Apostolic Exhortations, 11 Apostolic Constitutions and 45 Apostolic Letters. He also wrote five books: Crossing the Threshold of Hope (October 1994); Gift and Mystery: On the Fiftieth Anniversary of My Priestly Ordination (November 1996); Roman Triptych, meditations in poetry (March 2003); Rise, Let Us Be on Our Way (May 2004) and Memory and Identity (February 2005).

Pope Saint John Paul II celebrated 147 beatifications, during which he proclaimed 1,338 blesseds, and 51 canonizations, for a total of 482 saints. He called 9 consistories, in which he created 231 Cardinals (plus one in pectore). He also presided at 6 plenary meetings of the College of Cardinals.

On 13 May 1981, an attempt was made on Pope Saint John Paul II's life in Saint Peter's Square. Saved by the maternal hand of the Mother of God, following a lengthy stay in the hospital, he forgave the attempted assassin and, aware of having received a great gift, intensified his pastoral commitments with heroic generosity.

Pope Saint John Paul II also demonstrated his pastoral concern by erecting numerous dioceses and ecclesiastical circumscriptions, and by promulgating Codes of Canon Law for the Latin and the Oriental Churches, as well as the Catechism of the Catholic Church. He proclaimed the Year of Redemption, the Marian Year and the Year of the Eucharist as well as the Great Jubilee Year of 2000, in order to provide the People of God with particularly intense spiritual experiences. He also attracted young people by beginning the celebration of World Youth Day.

No other Pope met as many people as Pope Saint John Paul II. More than 17.6 million pilgrims attended his Wednesday General Audiences (which numbered over 1,160). This does not include any of the other special audiences and religious ceremonies (more than 8 million pilgrims in the Great Jubilee Year of 2000 alone). He met millions of the faithful in the course of his pastoral visits in Italy and throughout the world. He also received numerous government officials in audience, including 38 official visits and 738 audiences and meetings with Heads of State, as well as 246 audiences and meetings with Prime Ministers.

Pope Saint John Paul II died in the Apostolic Palace at 9:37 p.m. on Saturday, 2 April 2005, the vigil of Sunday in albis or Divine Mercy Sunday, which he had instituted. On 8 April, his solemn funeral was celebrated in Saint Peter's Square and he was buried in the crypt of Saint Peter's Basilica.

John Saint Paul II was beatified in Saint Peter's Square on 1 May 2011 by Pope Benedict XVI, his immediate successor and for many years his valued collaborator as Prefect for the Congregation for the Doctrine of the Faith. Pope Saint John Paul II, pray for us!