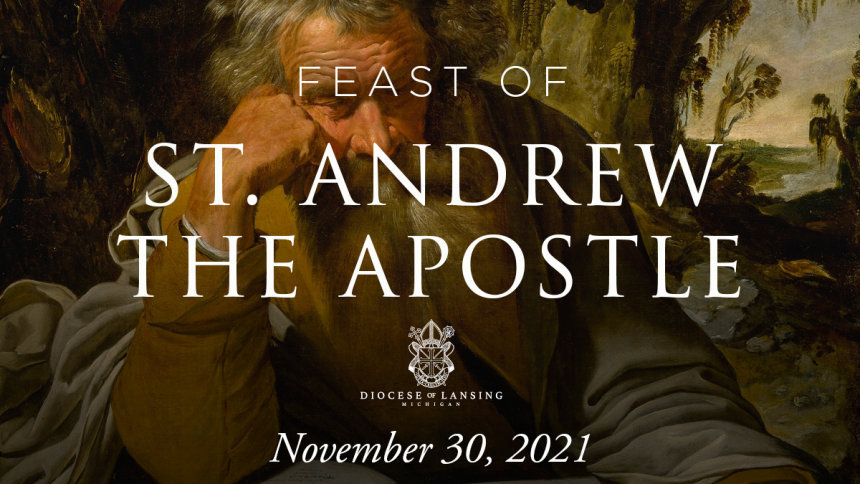 Today is the Feast of Saint Andrew, the Apostle. Happy feast day! Andrew was a Galilean fisherman, a disciple of John the Baptist and, according to Saint John’s Gospel, the first of the apostles to grasp the significance of Jesus’ divine ministry: “We have found the Messiah,” he eagerly tells his brother, Simon Peter, after encountering Christ on the banks of the River Jordan.

Following Pentecost, tradition hold that Andrew preached in Asia Minor and Greece where he was martyred at Patras on an X-shaped cross. In the 4th century, it is said that the Greek monk, Saint Regulus, was told in a dream to take the bones of Saint Andrew to the western ends of the earth for safe keeping.

After a long sea journey, Saint Regulus and his companions arrived upon the eastern shores of Scotland at Kilrymont. The settlement was subsequently renamed Saint Andrews. The city’s cathedral, with its relics of Saint Andrew, became one of the great pilgrimage destinations of Europe while Andrew was embraced as Scotland’s national patron. The cathedral, the relics and the celebration of today’s feast all fell victim to the destruction of the Scottish Reformation of 1560.

“May the Divine clemency, thus earnestly implored by us, grant to the Church that supreme consolation of speedily embracing the whole Scottish people, restored to the faith of their forefathers ‘in spirit and in truth’,” prayed the 1898 Encyclical on the Church in Scotland, Caritatis Studium, written by Pope Leo XIII who had restored the Scottish hierarchy 20 years previously.

“What incalculable blessings would not accrue to them, if they were once more united to us? Perfect and absolute truth would everywhere shine forth, together with the inestimable gifts which were forfeited by separation.”

Have a happy and holy feast day! Saint Andrew, pray for us!