Quentin Peacock (pictured below) is one of the most highly regarded digital heraldic artists in the world – and now he has refreshed the Diocese of Lansing coat of arms to bring it into the 21st century.

“It became apparent that our existing diocesan coat of arms needed to be redrawn to make it more useable on digital platforms” explained Michael Andrews, Chancellor of the Diocese of Lansing, March 6.

“Quentin Peacock is among the most gifted digital heraldic artists in the world. He was delighted to receive the commission from the Diocese of Lansing and we are delighted with his finished work.”

Quentin Peacock is based in Cambridgeshire, England. He is a Craft Member of the Society of Heraldic Arts and is frequently commissioned as a heraldic artist by the College of Arms, the official heraldic authority for much of the English-speaking world, including England, Wales, Northern Ireland and New Zealand. Quentin’s most public work to date came in 2016 when he created digital artwork featuring the coat of arms for the British Olympic Association. These arms were used by Team GB on their uniforms for the 2016 Rio Olympics, outfits that were designed by Stella McCartney and produced by Adidas.

The coat of arms of the Diocese of Lansing was created in 1937 by the American heraldic artist, Pierre De Chaignon La Rose (1871 –1941) who designed coats of arms for many U.S. bishops, dioceses and institutions including the Catholic University of America and Notre Dame University.

The field or background of the shield is partitioned into four sections, two of blue and two of silver or white, these being the heraldic colors of the Immaculate Conception, to whom both the diocese and the cathedral are dedicated. The lances crossed diagonally allude to the name of the see city, Lansing. The cross signifies the Catholic Faith. The ends of the cross are shaped like anchor flukes, which is appropriate to the city situated, as it is, at the confluence of two rivers, the Red Cedar and the Grand, with the latter winding through the city much in the form and shape of an anchor. This type of cross was also used by the old family of Ingham after whom Ingham County is named.

The casual observer of the re-drawn coat of arms will also note the addition of a cross and crozier. In ecclesiastical heraldry, the cross behind a shield is a symbol of the office of bishop. The cross of a bishop has a single horizontal bar or traverse, also known as a Latin cross. Meanwhile, the crozier is as a symbol of pastoral jurisdiction by bishops, abbots, abbesses, and cardinals, even if they were not bishops. The crosier of a bishop is turned outward or to the right.

Also present is a new diocesan motto, Iuxta Crucem Iesu, which is taken from St. John’s account of the Crucifixion: “Now there stood by the cross of Jesus, his mother, and his mother's sister, Mary of Cleophas, and Mary Magdalen.” (John 19:25)

“The motto chosen by Bishop Boyea re-consecrates our diocese to the maternal care of our patroness, the Immaculate Virgin Mary,” says Michael Andrews.

“It is taken from the Gospel according to John. The Blessed Mother stands near the Lord’s Cross: the great sign of our redemption. It was there that the Lord gave Mary to us – his beloved disciples – to be our Mother, too. She stands near each believer through every joy and every cross we experience.” 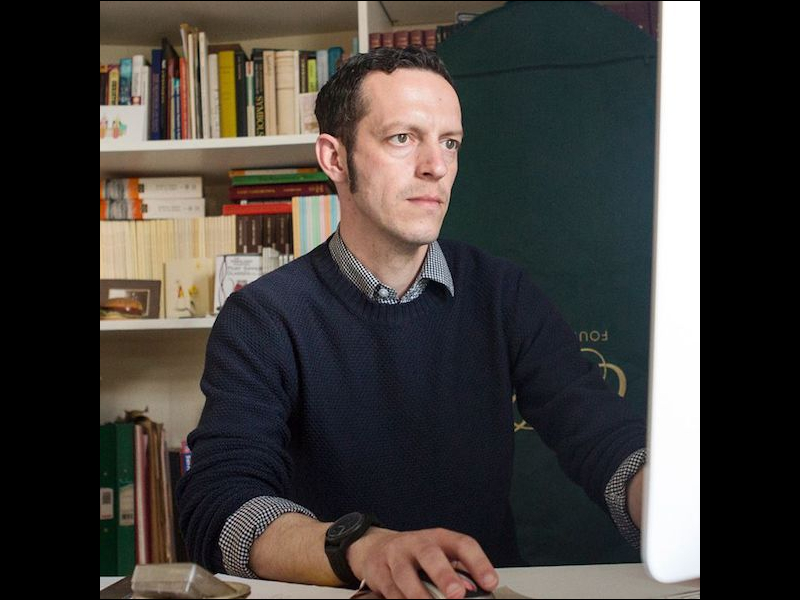