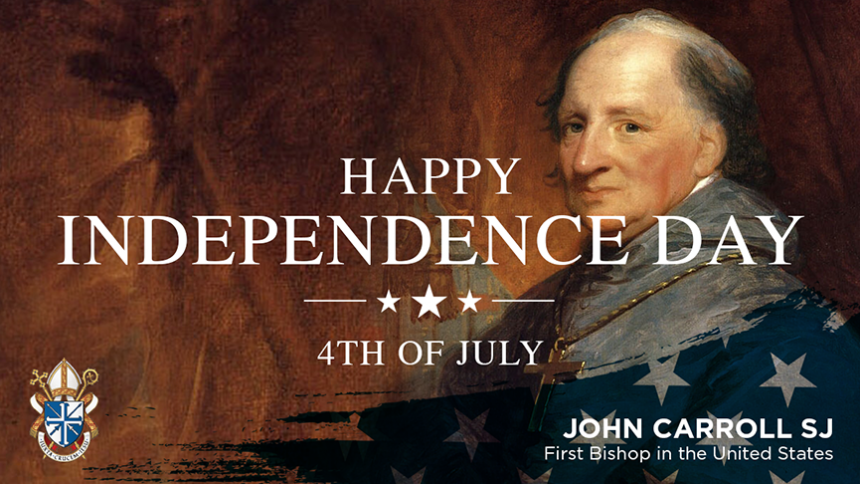 On this day in 1776, the founders of the United States of America, who were gathered at the Second Continental Congress in Philadelphia, declared that the thirteen American colonies were no longer subject to the British monarch, King George III, and were now united, free, and independent states. Happy Independence Day!

“All the nations you have made shall come to bow before you, Lord, and give honor to your name. For you are great and do wondrous deeds; and you alone are God” (Psalm 86:9-10).

In 1776 Father Carroll accompanied a delegation from the Continental Congress consisting of Benjamin Franklin, Samuel Chase, and his cousin Charles Carroll on a mission to Canada. The mission was unsuccessful in winning Canada over to the American side in the Revolution. Father Carroll journeyed back to Philadelphia, caring for an ailing Benjamin Franklin. Benjamin Franklin would remember John Carroll’s kindness later when asked by the Vatican to recommend a priest who would become the first bishop of the United States.

In 1786 Baltimore was named the first diocese of the United States with John Carroll as its bishop. John Carroll was bishop and archbishop of Baltimore for 35 years. His death in 1815 was the occasion of a universal outpouring of regret. As he approached his death, Archbishop Carroll said: “Of those things that give me most consolation at the present moment, one is that I have always been attached to the practice of devotion to the Blessed Virgin Mary; that I have established it among the people under my care, and placed my diocese under her protection.” May he rest in peace.

Mary Immaculate, Patroness of the United States of America, pray for us.