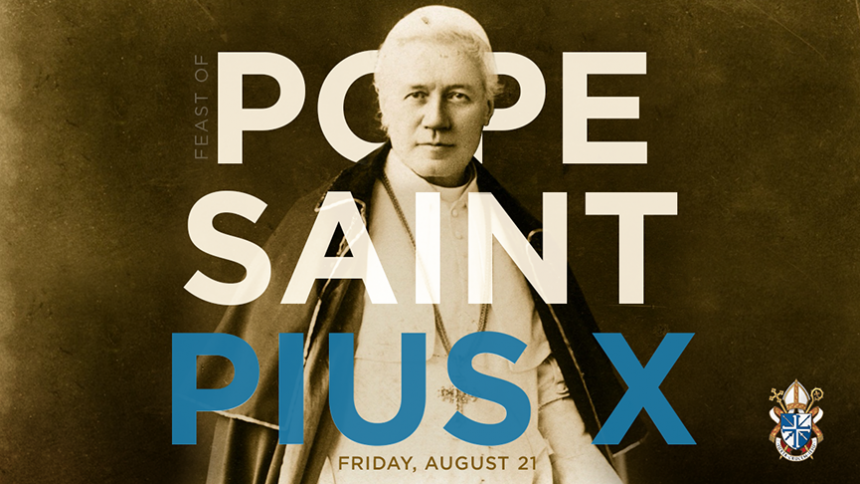 “In his first encyclical, Pope Pius X stated that he wished to ‘renew all things in Christ’ and he certainly set about that saintly task with great zeal during his 11 years on the Throne of Saint Peter,” said Craig Pohl, Director of New Evangelization for the Diocese of Lansing, August 21.

“Perhaps his greatest legacy to us today is his decree on the early and frequent reception of Holy Communion; his encouragement of daily Bible reading; and his stand against the errors of Modernism which he condemned in his 1907 encyclical Pascendi dominici gregis as the ‘synthesis of all heresies’. Thus, Pope Saint Pius X teaches us both orthodoxy and orthopraxy. That is, right belief and right practice in the Christian life.”

Pope Pius X was born Joseph Sarto at Riese in Venetia, Italy, on June 2, 1835. By special dispensation, he was ordained at the age of 23. He then labored for 17 years as a parish priest, then as Bishop of Mantua, and in 1892 was translated to the Metropolitan See of Venice. On August 4, 1903, he was elected Pope. He was described as “a man of God who knew the unhappiness of the world and the hardships of life, and in the greatness of his heart wanted to comfort everybody.”

The outbreak of the First World War in 1914 was the blow that occasioned his death. Bronchitis developed within a few days and, on August 20, Pope Pius X succumbed to “the last affliction that the Lord will visit on me”.

He had said in his will, “I was born poor, I have lived poor, I wish to die poor”. His sanctity and his power to work miracles had already been recognized. Pius X was the first Pope canonized since St. Pius V in 1672.

"He was one of those chosen few men whose personality is irresistible,” wrote the German historian, Baron Ludwig von Pastor, “Everyone was moved by his simplicity and his angelic kindness. Yet it was something more that carried him into all hearts: and that 'something' is best defined by saying that all who were ever admitted to his presence had a deep conviction of being face to face with a saint.”

Have a very happy and holy feast day! Pope Saint Pius X, pray for us!