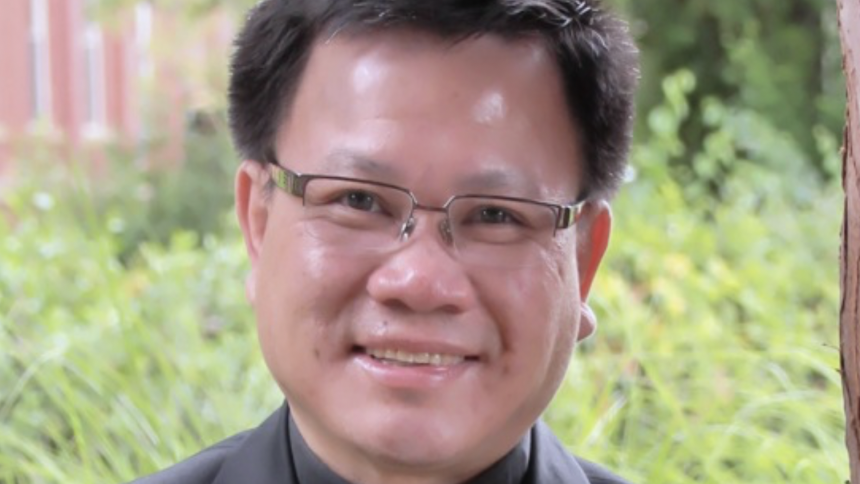 Of your charity, please pray for the repose of the soul of Father Vincent Bui P.S.S., Priest of the Diocese of Lansing, who died yesterday, June 9, 2020, of COVID-19. He was 58-years-old. May he rest in in peace.

Vincent Bui was born on June 25, 1961 in Bien Hoa, North Vietnam, to Trinh Q. and Yen T. (Duong) Bui. He is the sixth of eight children and is survived by two brothers (one also a priest) and four sisters (one a Dominican Sister).

Upon graduating from high school in 1979, he attempted to escape from Vietnam but was captured in his thirteen attempts. His brother arranged another attempt and was successful on this fourteenth try. He escaped Vietnam on Easter Sunday, 1981, an experience which gave the mystery of Easter an ever deeper meaning of suffering, freedom, and new life. After spending about eight months in refugee camps in Thailand and Bangkok, he arrived in the US on February 4, 1982.

After getting settled at his father’s cousin’s house in Illinois in 1982, Vincent Bui spent two years studying English at Divine Word College in Iowa and then moved to Quincy, Illinois to join the Franciscans. He remained with them for only one year. For the next four years he lived in Champaign-Urbana, Illinois while he worked as a bilingual social worker with refugees through the East Central Illinois Refugee Mutual Assistance Center. In addition to working with refugees, he also worked in a variety of other positions for the local community and the local church.  In 1989 he took a position with the Resettlement Program of the Catholic Social Service of the Diocese of Peoria, IL. Out of this work, he gave himself another chance at official ministry by applying to the Diocese of Lansing, MI in 1990. He began his theological studies and formation at St Mary’s Seminary & University in Baltimore, MD in 1990 under the auspices of the Diocese of Lansing.

Vincent Bui was ordained to the sacred priesthood for the Diocese of Lansing on June 10, 1995. He spent two years as an associate pastor at St. Robert Bellarmine, Flushing, MI from 1995-1997. It was during that time that Fr. Bui felt drawn to the Society of St. Sulpice, also known as the Sulpicians, a society of apostolic life which consists of diocesan priests who educated, guide and support fellow priests.

Fr. Bui’s trajectory with the Sulpicians began in an unusual way for his time in that his candidacy years of formation were at the Emmaus Spirituality Centre (Lusaka, Zambia), a mission seminary providing a propaedeutic program for young men interested in going to the major seminary.  While in Africa he contracted malaria, a disease which had negative ramifications for his health from then on. After his two years of candidacy in Zambia, he returned to the States and was admitted as a definitive member of the Society in 2000. He then spent a year at The Catholic University of America completing the licentiate degree in Canon Law (2001).

After completing the JCL, he was assigned to the faculty of St. Patrick’s Seminary, Menlo Park, CA from 2001-2006. From there, he went off to do further studies in Canon Law at St. Paul University, Ottawa, Canada, but never completed the degree. He returned to St. Patrick’s Seminary in 2009 and remained there until the Sulpicians withdrew from St. Patrick’s in 2017. After a sabbatical year, Fr. Bui moved to Assumption Seminary in San Antonio, Texas, in 2018.

When the coronavirus pandemic forced the closure of the seminary in late March, Fr. Bui went to live with relatives in San Jose, CA. He was hospitalized on May 13 in the San Jose Regional Medical Center due to complications from the COVID-19 virus. After nearly a month in the ICU and on a ventilator, Fr. Bui died on June 9, 2020, one day shy of his twenty-fifth anniversary of ordination. May he rest in peace.

The family has asked that Fr. Bui be cremated and that the cremains be returned to Vietnam so that he can be buried in the family plot.  A memorial service will be held in the Diocese of San Jose. Bishop Earl Boyea will offer Holy Mass for Fr. Bui at St. Mary Cathedral in Lansing on Tuesday, June 16, at 12 noon.