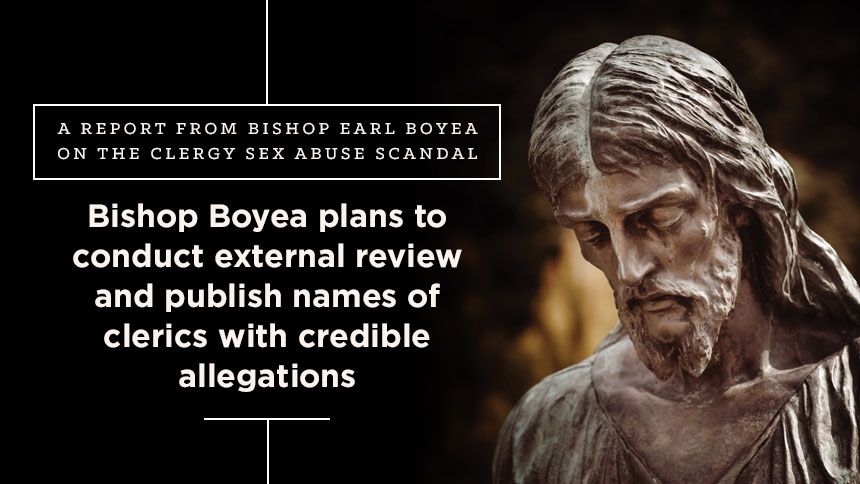 The Boston Globe and the Philadelphia Inquirer newspapers teamed up for an article published in both daily papers Nov. 4 that examined ways it said the U.S. bishops have failed to police themselves even since their 2002 gathering in Dallas about clergy sex abuse.  < more >
11/05/18

The Diocese of Lansing fully cooperated in the execution of a search warrant served on Wednesday, October 3, related to the current investigation by the office of the Michigan Attorney General.

As was stated when this investigation was announced last month “The Diocese of Lansing welcomes a review of our handling of abuse cases by Michigan’s Attorney General. We are confident in our processes. We have and will continue to reach out to law enforcement with these matters.” < more >
10/03/18

Today, the Michigan Attorney General announced he has opened an investigation into all seven Michigan Catholic dioceses looking into the handling of allegations of sexual abuse of minors by clerics. The Diocese of Lansing welcomes a review of our handling of abuse cases by Michigan’s Attorney General. We are confident in our processes. We have and will continue to reach out to law enforcement with these matters. < more >
09/21/18

We, the Administrative Committee of the United States Conference of Catholic Bishops, assembled last week in Washington at this time of shame and sorrow. Some bishops, by their actions or their failures to act, have caused great harm to both individuals and the Church as a whole. They have used their authority and power to manipulate and sexually abuse others. They have allowed the fear of scandal to replace genuine concern and care for those who have been victimized by abusers. For this, we again ask forgiveness from both the Lord and those who have been harmed. Turning to the Lord for strength, we must and will do better. < more >
09/19/18

Dear Brothers and Sisters in Christ, Recently, we have been horrified by more revelations of predatory sexual conduct by Catholic clergy as well as by the abuse of power and sexual sin by a cardinal. The horrid behavior described in a grand jury report from Pennsylvania is shocking. Not only are these acts deeply sinful, they are criminal. Anyone guilty of causing such pain to victims, as well as those at any level within the Church’s leadership who protected sexual predators, must be held accountable. Justice demands it. < more >
09/11/18

Summary of Diocese of Lansing Policy on Clergy Sexual Abuse

On Friday, September 14, Bishop Boyea will celebrate the 8:00 a.m. Mass at St Mary Cathedral, followed by a Holy Hour, in reparation especially for the sins of the bishops. Many parishes in the Diocese of Lansing will be doing the same -- please check with your parish. < more >
09/07/18

The New York State Office of the Attorney General is the latest to announce that it is launching an investigation of sexual abuse of minors by Catholic Church clergy, and at least two of the state's eight dioceses confirmed receiving subpoenas seeking access to its records.  < more >
09/06/18

The National Review Board has for several years expressed its concern that bishops not become complacent in their response to sexual abuse by the clergy. The recent revelations make it clear that the problem is much deeper.  We are saddened, angry, and hurt by what we have learned in the past few weeks. The evil of the crimes that have been perpetrated reaching into the highest levels of the hierarchy will not be stemmed simply by the creation of new committees, policies, or procedures. < more >
08/28/18

"On August 1st, I promised that USCCB would exercise the full extent of its authority, and would advocate before those with greater authority, to pursue the many questions surrounding Archbishop McCarrick. On August 16th, I called for an Apostolic Visitation, working in concert with a national lay commission granted independent authority, to seek the truth.  Yesterday, I convened our Executive Committee once again, and it reaffirmed the call for a prompt and thorough examination into how the grave moral failings of a brother bishop could have been tolerated for so long and proven no impediment to his advancement.  < more >
08/27/18

Pope says he trusts people to judge archbishop's claims about him

Pope Francis said Archbishop Carlo Maria Vigano's long document calling on him to resign is written in a way that people should be able to draw their own conclusions.  "I read the statement this morning and, sincerely, I must say this to you and anyone interested: Read that statement attentively and make your own judgment.  I think the statement speaks for itself, and you have a sufficient journalistic ability to make a conclusion."  < more >
08/26/18

A former apostolic nuncio to the United States accused church officials, including Pope Francis, of failing to act on accusations of abuse of conscience and power by now-Archbishop Theodore E. McCarrick.  < more  >
08/26/18

Pope Francis spent 90 minutes meeting privately with eight survivors of sexual, physical and emotional abuse at the hands of Catholic clergy or in Catholic-run schools and institutions.  The meeting took place at the Vatican nunciature in Dublin Aug. 25, the first day of Pope Francis' two-day visit to Ireland, the Vatican press office announced.  < more >
08/25/18

President of U.S. Bishops’ Conference Response to Pope Francis’s Letter to the People of God

Cardinal Daniel N. DiNardo of Galveston-Houston, President of the United States Conference of Catholic Bishops (USCCB), issued a statement in response to Pope Francis's Letter to the People of God. In his letter addressed to the whole People of God, the Pope calls on the Church to join in acts of prayer and fasting in "combatting all forms of abuse of power, sexual abuse and the abuse of conscience."  < more >
08/22/18

" I am writing this to you due to the recent removal of Archbishop Theodore McCarrick from ministry and the release of the grand jury report on clergy abuse in Pennsylvania. Once again, the sins of clergy have hurt victims, scandalized the faithful, raised anger in many hearts, and brought ill-repute upon the Catholic Church. Archbishop McCarrick’s abuse of minors, his homosexual activity and his abuse of seminarians and young priests are beyond the pale."  < more >
08/16/18

The USCCB Executive Committee has established three goals: (1) an investigation into the questions surrounding Archbishop McCarrick; (2) an opening of new and confidential channels for reporting complaints against bishops; and (3) advocacy for more effective resolution of future complaints. These goals will be pursued according to three criteria: proper independence, sufficient authority, and substantial leadership by laity.  < more >

The report of the Pennsylvania grand jury again illustrates the pain of those who have been victims of the crime of sexual abuse by individual members of our clergy, and by those who shielded abusers and so facilitated an evil that continued for years or even decades. We are grateful for the courage of the people who aided the investigation by sharing their personal stories of abuse. As a body of bishops, we are shamed by and sorry for the sins and omissions by Catholic priests and Catholic bishops.  < more >

The accusations against Archbishop Theodore McCarrick reveal a grievous moral failure within the Church. They cause bishops anger, sadness, and shame; I know they do in me. They compel bishops to ask, as I do, what more could have been done to protect the People of God. Both the abuses themselves, and the fact that they have remained undisclosed for decades, have caused great harm to people's lives and represent grave moral failures of judgement on the part of Church leaders.  < more >

Office of the Bishop, Office of Child and Youth Protection, Clergy Sexual Abuse Crisis in the Church