For Blessed Solanus, the poor were ‘light of the splendor of God,’ cardinal says 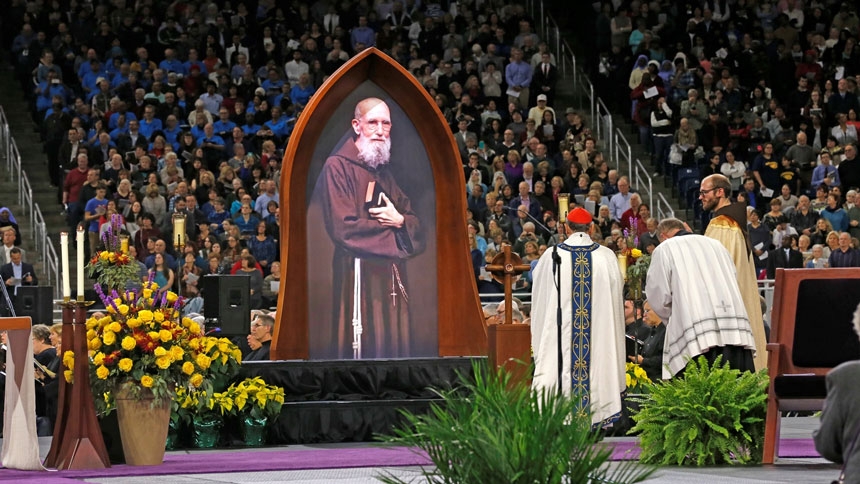 DETROIT — A humble priest and porter, Fr. Solanus Casey thanked God daily for the gift of those who came to his door in his small corner of the world.

On Nov. 18, tens of thousands of those whom he touched gathered to thank God in return for the gift of the holy Capuchin’s life.

“Others, above all the poor, were seen by him not as a weight or obstacle to his climb to perfection, but as a way to the light of the splendor of God,” Cardinal Angelo Amato, prefect of the Congregation for the Causes of Saints, told the estimated 65,000 people gathered at Detroit’s Ford Field for Blessed Solanus’ beatification Mass.

A congregation of almost 65,000 — young, old, clergy and laity, those of all races and ethnicities — flooded into Ford Field for the Mass, with tens of thousands more watching live on TV or the Internet. Countless others visited the Solanus Casey Center and St. Bonaventure Monastery over the weekend to pray and leave prayer intentions at the tomb of a saintly friar known for miraculous healings, intercessions and a compassionate listening ear.

True to Blessed Solanus’ spirituality, a special VIP section of the main floor was set aside for those with illness and disabilities.

Capuchin Fr. Michael Sullivan, provincial minister of the Detroit-based Capuchin Franciscan Province of St. Joseph, welcomed those in attendance, “especially those whom Fr. Solanus so loved – the sick and the poor.”

“We gather in gratitude for all of God’s blessings and for all the ways in which God moves in our lives,” Fr. Sullivan said. “What a witness was our beloved brother Solanus! He opened his heart to each person he met, he prayed with them, appreciated and loved them, and through him God moved powerfully again and again. Thanks be to God!”

About 35 bishops, 400 priests and deacons and more than 200 Capuchins joined together in praise with 300 members of the Casey family, members of the Father Solanus Guild and thousands of faithful during the Mass.

A friar and a friend
“His favorite sons were the poor, the sick, the emarginated and the homeless,” Cardinal Amato said of Blessed Solanus, the Wisconsin-born priest with Irish roots and a whispery voice who served as a monastery doorkeeper in New York, Detroit and Huntington, Ind., over his 60 years as a Capuchin friar. “He always fasted in order to give them their own lunch. He spent hours upon hours patiently receiving, listening to, and counseling the ever-growing number of people who came to him.”

“Practically speaking, the greater part of his time as porter was dedicated to others: from 9 o’clock in the morning until 9 at night, almost without interruption. When they asked for him while he was eating, he went immediately, saying: ‘Food is not so important as is to seek to help others,'” Cardinal Amato said.

Once, the cardinal recounted, when the Capuchin Soup Kitchen — which Blessed Solanus helped start during the Great Depression — ran out of food, the friar simply prayed an Our Father, and a truckload of bread showed up.

“When the people saw this they began to cry with emotion. Fr. Solanus simply stated: ‘See, God provides. No one will suffer want if we put our trust in Divine Providence,” Cardinal Amato said.

“Witnesses affirmed that love, faith and trust were the three points that he always preached to people,” Cardinal Amato continued. “Faith, hope and charity were for him the seal of the Trinity in our souls.”

Born Nov. 25, 1870, to a family of 16 children, Blessed Solanus spent his early years as a lumberjack, street car operator and prison guard before entering the seminary. After witnessing a violent attack in Superior, Wis., he resolved to devote his life to God.

Despite language barriers slowing his studies toward the priesthood, he was eventually ordained a “simplex priest,” and spent the next 60 years greeting people at the monastery doors in New York, Indiana and Detroit, where he became a warm and familiar face to thousands seeking his counsel and prayers.

Cardinal Amato garnered laughs when he acknowledged that Blessed Solanus had “one little defect in his life: in the judgment of his fellow friars, Fr. Solanus was a bad musician.”

“For this reason, after his first failure in the community, with simplicity and humility, in order not to disturb his neighbor, on Sunday evening he went to the chapel with his violin and played Irish religious songs in front of the tabernacle. The Lord listened to him patiently because our blessed was lacking in music, but not in virtue,” Cardinal Amato said with a smile.

Before Mass, more than 100 priests heard confessions near Ford Field’s expansive concourse. On the stadium’s big screen, testimonials of those who had received favors from Blessed Solanus played, and priests prayed with families asking for healing.

When Mass began, a procession of bishops and priests emerged from the stadium’s dark tunnel to the triumphant Festival Canticle, “This is the feast of victory for our God, Alleluia!” It was a surreal sight as thousands joined their voices, singing loudly to praise God for a friar and a friend.

At the beginning of Mass, Archbishop Vigneron’s voice choked with emotion as he asked Cardinal Amato to read the decree from Pope Francis “by which the Servant of God, Solanus Casey, will be enrolled in the official catalogue of the Blessed of our Church.”

“For decades countless faithful have awaited this moment, which has been the object of so many requests,” Archbishop Vigneron said.

As the 65,000 in attendance remained standing, Cardinal Amato read the decree in Latin, followed by an English translation from Archbishop Vigneron. As part of the decree, Cardinal Amato announced Blessed Solanus’ feast will be celebrated July 30, the vigil of the anniversary of the friar’s death in 1957.

An image of Blessed Solanus was then unveiled behind the altar, followed by thunderous applause.

As a hymn of thanksgiving was performed, the relics of Blessed Solanus — a small piece of bone taken from the friar’s arm — were carried in procession adorned with flowers and candles and presented at the altar.

Carrying the reliquary was Paula Medina Zarate, the Panamanian woman whose 2012 healing from a genetic skin disease was the official miracle needed to advance Fr. Solanus’ cause to beatification.

Others in the procession included those who’ve received significant favors through the blessed friar’s intercession, including:
-Molly Towne, a New York woman who was stillborn 33 years ago, whose family and bishop credit her survival to the intercession of Blessed Solanus;
-Sr. Helen Theresa Bodziak, OSF, a local Bernadine Franciscan whose dental-related healing was considered as part of the beatification investigation;
-Casey and Giana Johnson, fourth-graders and twins from Florida, whose parents were unable to conceive until praying to Blessed Solanus;
-Dennis Lukasik, a local man who was healed of a serious illness as a child after Blessed Solanus prayed over him;
-Eugene Beaudrie, a Colorado man who was healed of a heart condition after asking Blessed Solanus’ intercession

A gift of humble service
Reflecting the diversity of the Church in which Blessed Solanus served, readings and prayers of the faithful were proclaimed in several languages, including English, Spanish, Vietnamese, Chaldean, Polish and Tagalog.

Acknowledging the large ecumenical and interfaith contingent in attendance, Cardinal Amato noted that Blessed Solanus’ profound faith allowed him to embrace and pray with those of all races, religions and walks of life.

“Rabbis and ministers of at least 16 Protestant congregations visited him often for discussions and advice,” Cardinal Amato said. “One day, a Protestant minister asked Fr. Solanus if he would pray for his seriously ill son. ‘Certainly,’ the Capuchin answered: ‘Only God can heal your son, but I will pray for him.’

“The new blessed exhorted, in fact, non-Catholics to live their faith authentically, even if for him Catholicism was the only true religion,” Cardinal Amato said.

Blessed Solanus’ entire life was a constant prayer of gratitude to his Creator, Cardinal Amato said, one he urged others to make as well.

“The prayer ‘Deo gratias’ (“Thanks be to God”) was frequently on his lips,” Cardinal Amato said. “He exhorted people to thank the Lord before making every request; this in order to commit Him all the more to answering it. He used to say that confidence in God produces serenity and joy, and takes away trouble and sorrow. Trust in God dispels darkness and opens the horizon of hope in eternal blessedness in heaven.”

During the presentation of the gifts, baskets of food were brought to the altar along with bread and wine, symbolizing Blessed Solanus’ ministry to the hungry through the Capuchin Soup Kitchen and the Capuchins’ continuing ministry today.

After Communion, the congregation was invited to sing “God, Be Praised for Humble Service,” a hymn commissioned in honor of Blessed Solanus written by Benedictine Sr. Delores Dufner.

Thanks be to God
In thanking Cardinal Amato and the Congregation for the Causes of Saints “for your devoted attention to the cause of Fr. Solanus’ beatification,” Archbishop Vigneron garnered loud cheers when he assured the cardinal that “the field hospital of mercy is open here in Detroit.”

“Your Eminence, when next you speak with our beloved Holy Father, Pope Francis, please let him know that we are grateful beyond measure that he has judged our beloved Fr. Solanus worthy of the rank of blessed,” Archbishop Vigneron said. “Assure His Holiness of our filial affection and loyalty and tell him that we are committed anew to imitate Blessed Solanus by witnessing to the good news of Christ’s mercy.”

Thanksgiving was a major theme of the Mass, as Fr. Mauro Johri, OFM Cap., minister general of the Capuchins worldwide, expressed his gratitude to all who had worked on Blessed Solanus’ cause over the years, especially the Capuchins and faithful in the Archdiocese of Detroit and through the Father Solanus Guild.

“As we thank the Lord today for the gift he’s given the Church through the life and example of Blessed Solanus, I want to congratulate all the Capuchins of the Province of St. Joseph, especially those here in Detroit,” Fr. Johri said. “It is a joyous celebration for Capuchins throughout the world.”

Now that Blessed Solanus has been beatified, the cause moves forward into a new phase, Fr. Johri said, one in which a new miracle will be needed “to (supply) holy mother Church the evidence it needs to raise Blessed Solanus to the altar of the saints in the universal Church.”

“We want to initiate this cause together, invoking the powerful intercession of Blessed Solanus for all who are here today, and all who are watching and listening on television and social media, seeking healing and grace,” Fr. Johri said.

Fr. Larry Webber, OFM Cap., who along with Bro. Richard Merling is co-vice postulator for Blessed Solanus’ sainthood cause, acknowledged that Blessed Solanus’ beatification comes on the eve of the first-ever World Day of the Poor, and asked the 65,000 in attendance to pray “for God’s grace to be poured out on all the poor and those in most desperate need.”

The Mass also comes on the first anniversary of the Archdiocese of Detroit’s Synod 16, Fr. Webber noted, praying that “the efforts of this local Church of Detroit to unleash the Gospel may bear good fruits for the kingdom of God among us.”

“With these and all the intentions in our hearts, and those of so many who gave us their intentions to be remembered at this Mass, let us fervently pray together the prayer for the canonization of Blessed Solanus Casey,” Fr. Webber said, “trusting God to shower over all of us the signs of His favor, thanking Him ahead of time.” 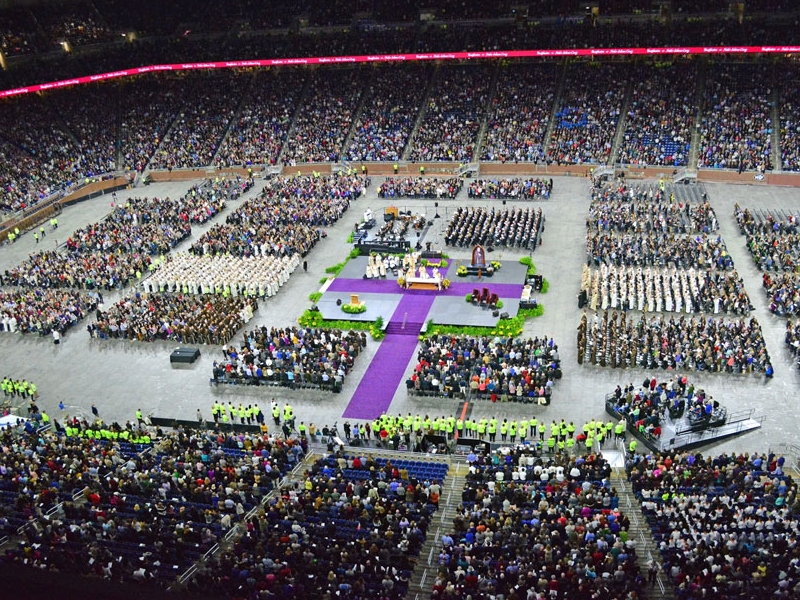 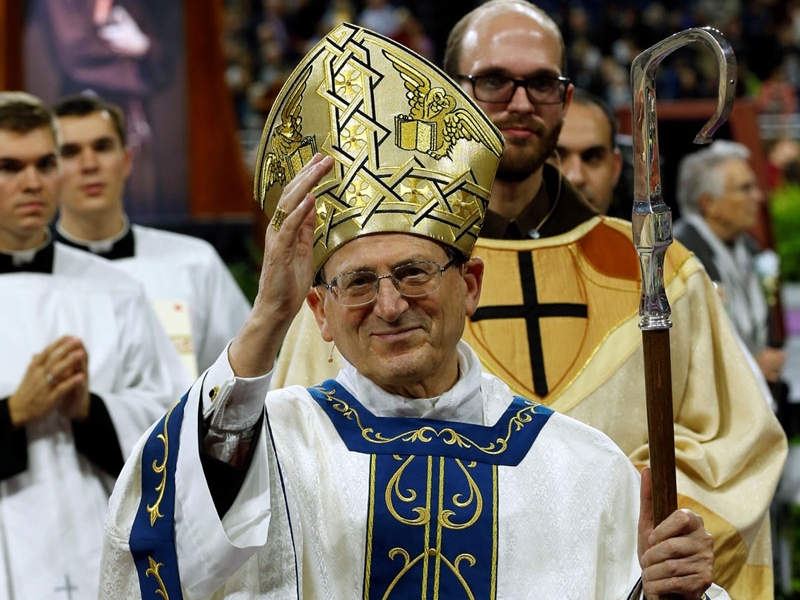 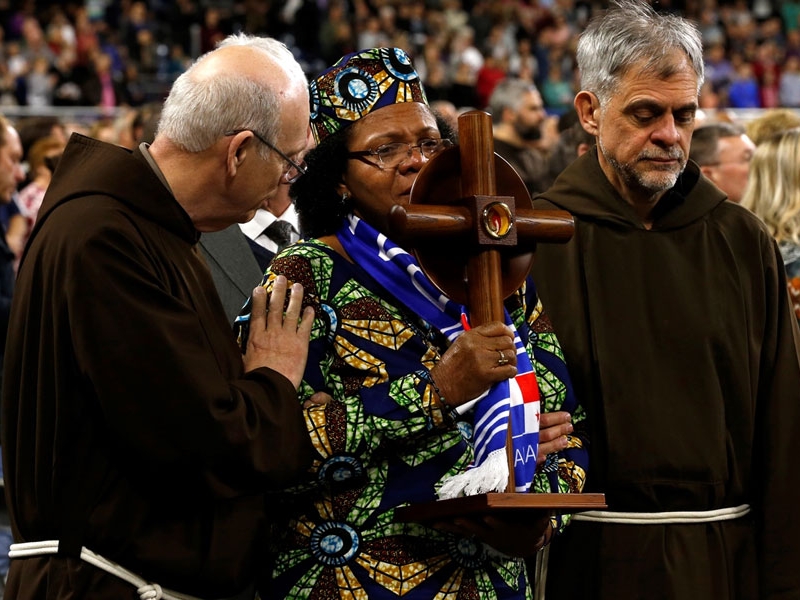 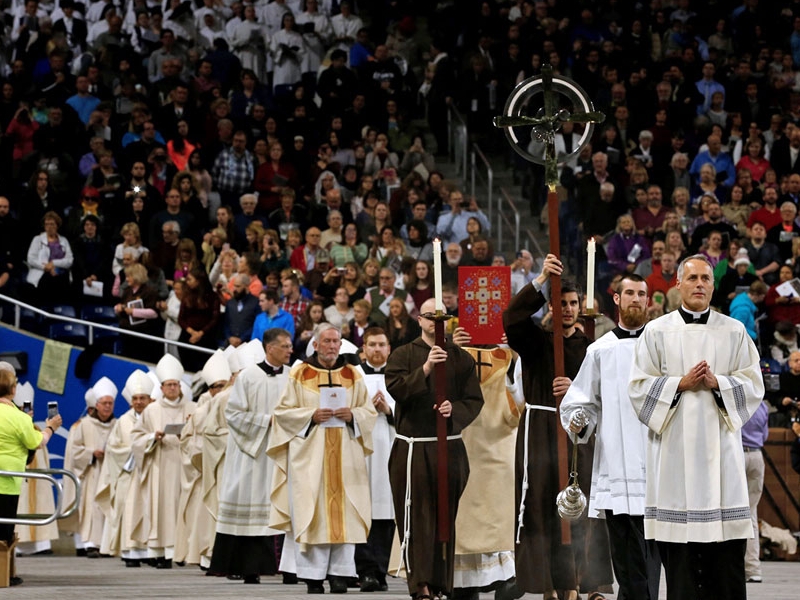 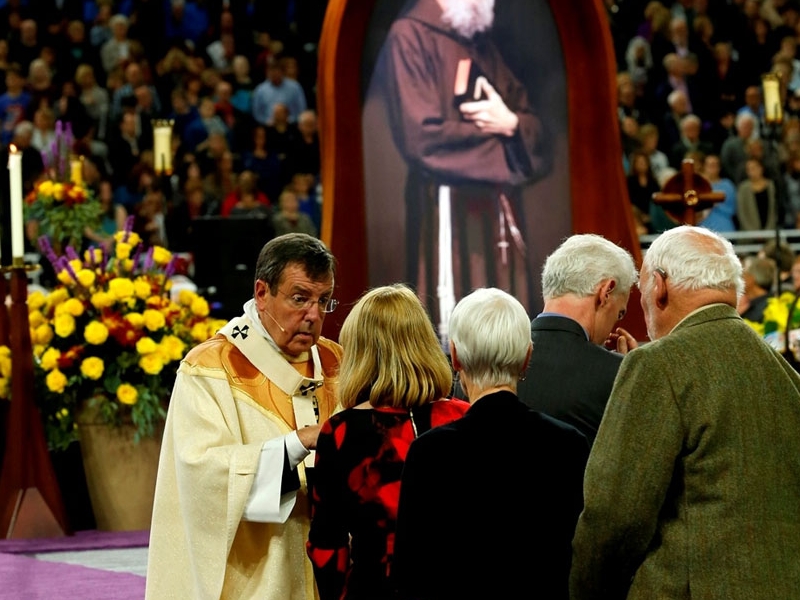 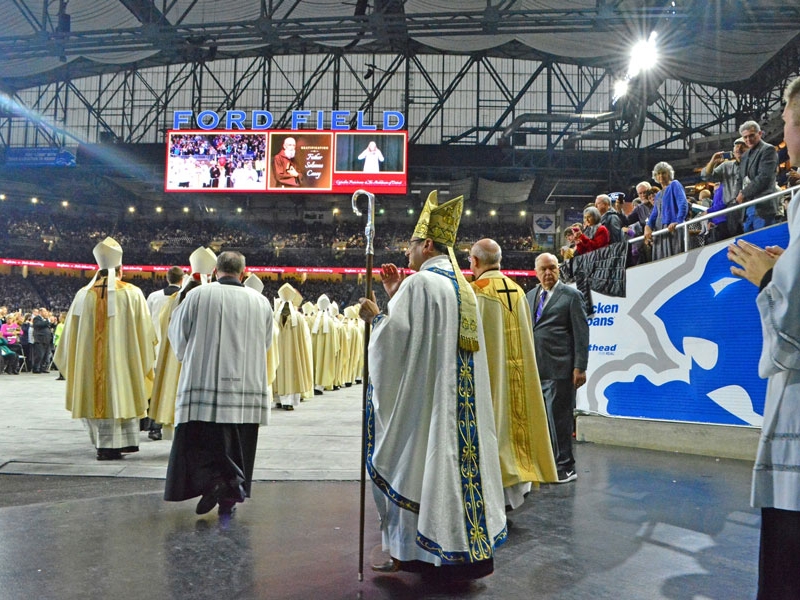 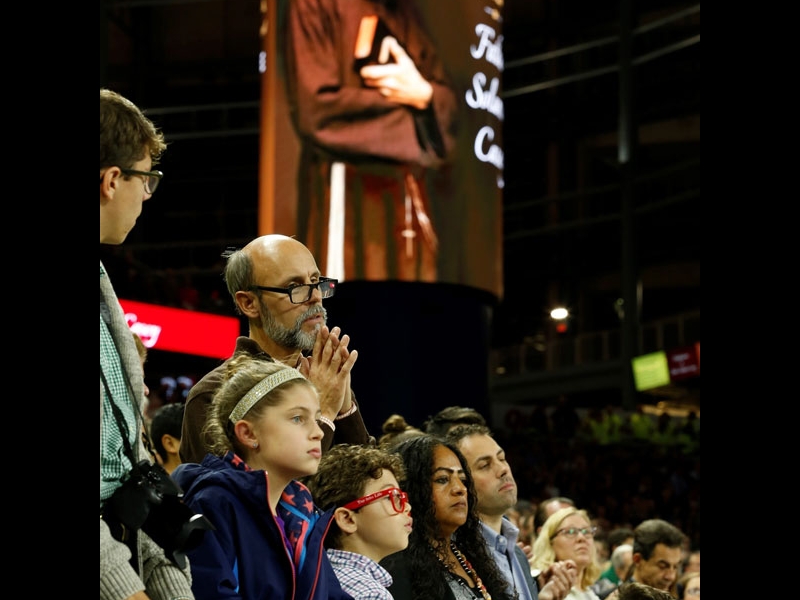 Communications, Office of the Bishop, Worship