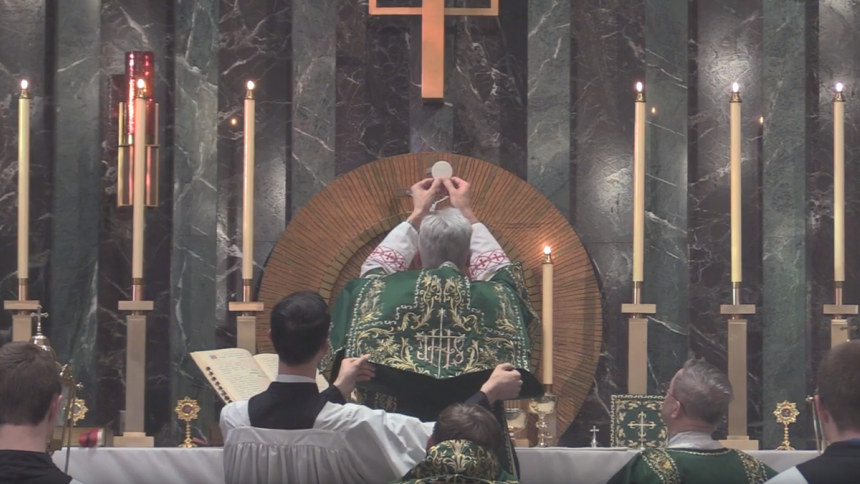 “We were very excited and very grateful to have Bishop Boyea here, it’s a great honor,” said Michael Haggerty, Chairman of the Traditional Latin Mass Community of Flint.

“The visit of Bishop Boyea wasn’t actually our idea as it was Bishop himself who, very generously, reached out to Deacon Sean Costello of St. Matthew’s in Flint, the church where we are usually based, and asked if he could come visit the Traditional Latin Mass Community and offer Holy Mass for us – we were more than delighted and, of course, said ‘yes’ immediately.”

Bishop Boyea was assisted during Pontifical High Mass by the Reverend Louis Madey as Deacon and the Reverend Sean Costello as Sub-Deacon. The sacred music, provided by a parish schola, was directed Vladimir Vaculik. Michael Haggerty, a father-of-four himself, says that young families are particularly attracted to the Extraordinary Form of the Roman Rite.

“Yes, there’s a certain crowd of people who come to this Mass, especially on the younger end of the spectrum, and the reason they come, I firmly believe, is that they are thirsty for something that is transcendent, a longing that the Extraordinary Form of the Roman Rite satisfies in a substantial way,” said Michael.

If you would like to know more about the Traditional Latin Mass Community in Flint go to their website at https://www.tlmflint.org/