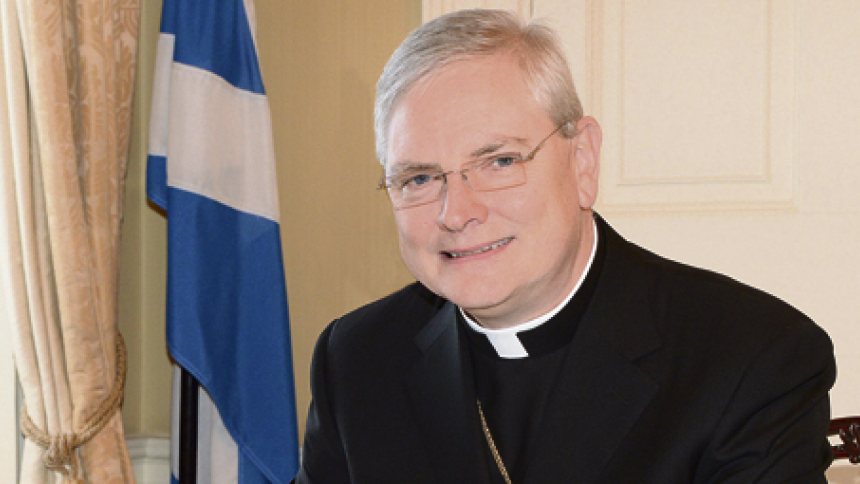 The Archbishop of Saint Andrews & Edinburgh in Scotland has imparted his Saint Andrew’s Day blessing upon the new parish school at Saint Andrew in Saline.

“To receive a Saint Andrew’s Day blessing from the Archbishop of Saint Andrews & Edinburgh, home to the relics of the apostle since the 4th century, is a great morale boost and spiritual fillip to our new school community at Saint Andrew in Saline,” said parish pastor, Father John Linden, November 30, Feast of Saint Andrew the Apostle who is also the patron saint of Scotland.

The video message from Archbishop Leo Cushley of Saint Andrews & Edinburgh is addressed to Father Linden and Michelle Sontag, Principal & Director of School Opening of Saint Andrew Catholic School. In his address, Archbishop Cushley says he is “delighted to hear” of the new school in Saline noting that a “very important element of passing along our Christian faith is to have our Catholic schools”.

Saint Andrew Catholic School plans to open in the Fall of 2023 with pre-kindergarten to sixth grade classrooms. The school is then planning to add preschool, seventh and eighth grade classrooms over the next few years. At present, 23 students are already enrolled. Mrs Sontag says her hope is to enroll between 60 and 80 students by the start of the school year.

“Thank you Archbishop Cushley,” said Father Linden, “Wherever Saint Andrew is venerated across the world today, whether in Scotland or Saline, our apostolic refrain remains the same: ‘We have found the Messiah!’”

It was in the 4th century that a Greek monk named St Regulus was told in a dream to take the bones of St Andrew to the “ends of the earth”. This journey ultimately saw his boat washed ashore upon Scotland’s eastern coast at Kilrymont, later renamed St Andrews. St Andrews grew to become one of Europe’s most important pilgrim destinations as well as Scotland’s ecclesiastical capital. Saint Andrew was adopted as the patron of Scotland in the 8th century.

The Archdiocese of Saint Andrews & Edinburgh traces its roots back to the 10th century. It was raised to the rank of an archdiocese in 1472 by Pope Sixtus IV. The archdiocese was suppressed in 1560 amid the Scottish Reformation but was re-established in 1878 by Pope Leo XIII. Archbishop Leo Cushley is the 56th bishop of St Andrews.