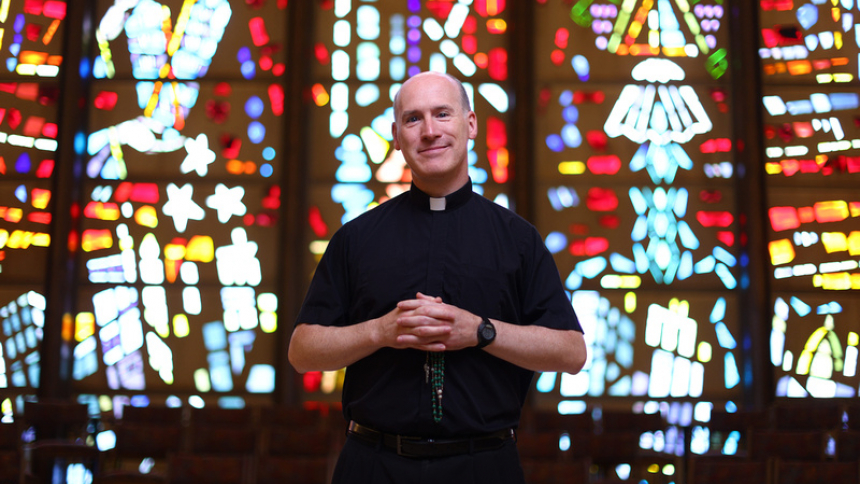 One Diocese of Lansing priest’s prayerful insight is inspiring thousands of people to sign up for a 54-Day Rosary Novena aimed at defeating an attempt to insert a “right to abortion” into the Michigan's State Constitution.

“One evening in July, I was praying in the rectory chapel at Saint Thomas Aquinas in East Lansing with the proposed constitutional amendment weighing heavy on my mind and on my heart,” explained the parish’s pastor, Father Gordon Reigle.

“So, I asked God what can be done to overcome such powerful and well-financed lobby groups as Planned Parenthood and the American Civil Liberties Union? Within a matter of minutes, the idea of a 54-day Rosary Novena popped into my head!”

The proposed constitutional amendment is entitled “Reproductive Freedom for All”. The ballot initiative seeks to enshrine abortion up to, and including, the day of birth. It also seeks to eliminate dozens of Michigan laws that presently regulate abortion including parental consent and notification laws and laws that prohibit partial-birth abortion.

“To be honest, I’ve never prayed a 54-day Rosary Novena before,” admitted Father Reigle, “I knew that it exists and that it is very powerful but, I have to tell you, the insight in prayer came as a surprise.”

A novena is nine days of prayer. Hence, a 54-day Rosary Novena is actually a series of six novenas: Three novenas to petition God and three novenas to thank God. It has roots going back to the 19th century and the miraculous cure of a young Italian woman, Fortuna Agrelli, through the intercession of Our Lady of Pompeii.

Father Reigle promptly took his prayerful insight to his immediate superior, Bishop Earl Boyea of Lansing. He heartily approved of the idea of the novena. Other dioceses across Michigan have since expressed an interest in the prayer initiative. The novena is due to begin this week.

“As it happens, I looked at the calendar and counted back 54-days from the conclusion of this novena on the day before the General Election. I was delighted to discover that this novena needs to start on September 15, the Memorial of Our Lady of Sorrows.”

Already thousands have signed up to receive a daily text reminder for each day of the novena. Father Reigle believes that victory in November’s election is only possible through the intercession of the Blessed Virgin Mary as “the patroness of the Gospel of Life”.

“Mary’s sorrowful heart grieves over the sufferings of her children, especially when our most innocent and vulnerable are threatened. May Our Lady protect us and save our children!”

* To sign up for a daily text reminder of the Father Reigle’s 54-Day Rosary Novena, text FightLikeHeaven to 84576.