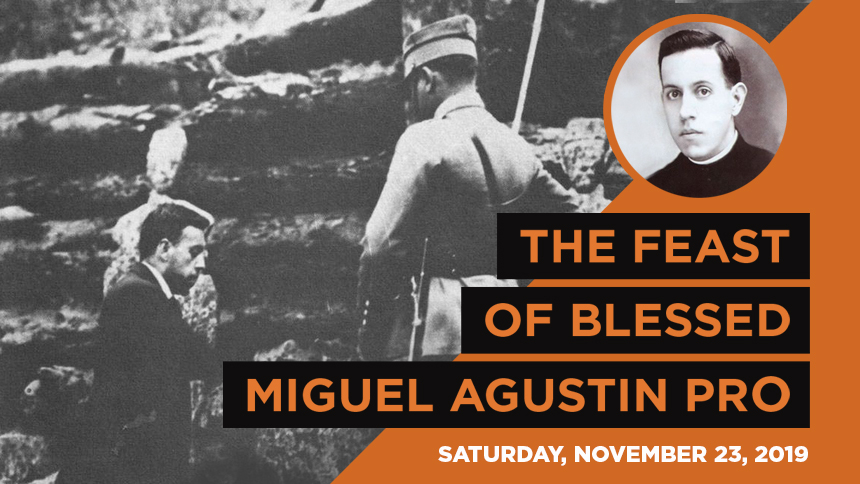 Today is the Feast of Blessed Miguel Agustín Pro (1891 – 1927), a Mexican Jesuit priest executed for his faithfulness to Jesus Christ and his Holy Church by an anti-Catholic Mexican regime which pursued, what the English writer Graham Greene described as, the “fiercest persecution of religion anywhere since the reign of Elizabeth”. Happy feast day!

“Mexico, being an overwhelmingly Catholic nation, cherishes Padre Pro as an icon who helps all to understand one of the deepest mysteries of our Catholic faith, that of laying one´s life down for the love of Jesus Christ and his Holy Church,” said Susana Chapa Vargas, Coordinator of the Hispanic Ministry for the Diocese of Lansing, 23 November.

Blessed Miguel Pro was sentenced to death amid the Cristero War (1926–29), which broke out in response to the brutal persecution of Catholics. While facing his firing squad, Blessed Miguel forgave his persecutors before raising his arms in imitation of Christ and crying out, “Viva Cristo Rey!” That is, "Long live Christ the King!”

“After years in exile due to the persecution of the Masonic-led government, Padre Pro arrived back to Mexico in 1926 to a country in which crucifixes had been ripped off the walls, religious statues had been smashed, Catholic publications had been closed, and many other priests had left the country fearing for their lives,” explained Susana, who is also a native of Mexico.

“Being one of the few priests at that time in Mexico, he devoted his life to bringing hope to the people who were being oppressed by a government who were openly saying that they hated Jesus Christ and the Catholic Faith. Thus, Padre Pro offered himself as an expiatory victim for all priests, the lay faithful and the good of all Christ’s Church in Mexico.”

“Padre Pro´s words of forgiveness to his executioners, just before they fired their rifles, and his proclamation of the Cristero ejaculation, “Viva Cristo Rey! is still an essential aspect of the lived expression of Catholicism for Mexicans.”