Read: Saint Teresa Benedicta of the Cross | Steadfast Love in the face of Evil by Lisa Kutas | August 9, 2022 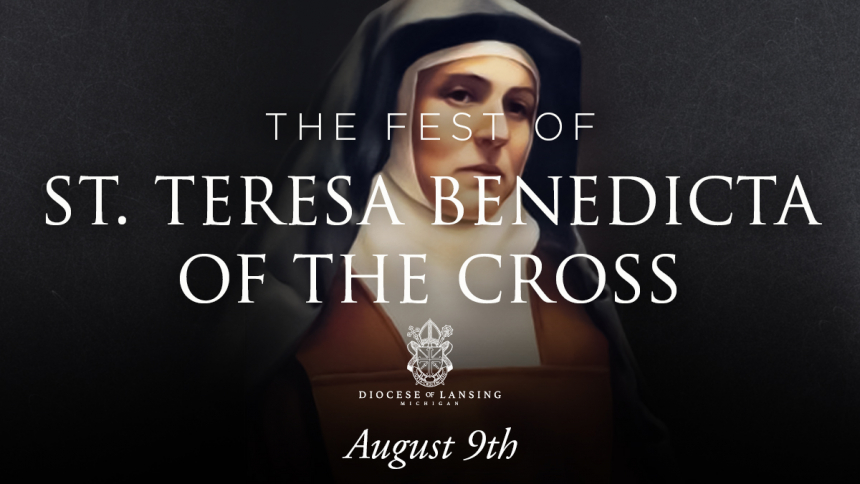 Today is the Feast of Saint Teresa Benedicta of the Cross, the Jewish girl turned atheist philosopher turned Carmelite nun who was martyred by the Nazis at Auschwitz in 1942. Pray for us!

The Diocese of Lansing’s Chief of Staff, Lisa Kutas, has a particular devotion to Saint Teresa Benedicta of the Cross and, indeed, in recent years has undertaken a seven-day retreat guided by the writings of Saint Teresa. Lisa says:

“The remarkable life of Saint Teresa Benedicta of the Cross bears the hallmarks of a woman of great integrity and intellect who chose to seek truth with all her heart, soul, strength and mind; who then found truth in the person of Jesus; and whose deep love for Christ, who is Truth incarnate, remained steadfast even in the face of persecution, imprisonment and martyrdom.”

Saint Teresa Benedicta of the Cross (1891 – 1942) was born Edith Stein into a prominent Jewish family in Breslau (now Wroclaw, Poland). Edith abandoned Judaism when she was 14-years-old and became an atheist.

As a student at the University of Gottingen, she became fascinated by phenomenology, an approach to philosophy. Excelling as a protege of Edmund Husserl, one of the leading phenomenologists, Edith earned a doctorate in philosophy in 1916. She continued as a university teacher until 1922 when she moved to a Dominican school in Speyer; her appointment as lecturer at the Educational Institute of Munich ended under pressure from the Nazis.

From reading the life of the great 16th century Spanish mystic and reformer, Saint Teresa of Ávila, Edith Stein was drawn to Christianity. She was baptized on 1 January 1922.

Edith was admitted as a postulant to the Discalced Carmelite monastery in Cologne on 14 October, 1933, upon the first vespers of the feast of Saint Teresa of Ávila, and received the religious habit as a novice in April 1934, taking the religious name Teresia Benedicta a Cruce (Teresia in remembrance of Saint Teresa of Ávila, Benedicta in honour of Saint Benedict of Nursia). She made her temporary vows on 21 April 1935, and her perpetual vows on 21 April 1938.

After living in the Cologne Carmel (1934-1938), she moved to the Carmelite monastery in Echt, Netherlands. The Nazis occupied that country in 1940. In retaliation for being denounced by the Dutch bishops, the Nazis arrested all Dutch Jews who had become Christians. Teresa Benedicta and her sister Rosa, also a Catholic, died in a gas chamber in Auschwitz on August 9, 1942.

Pope Saint John Paul II beatified Teresa Benedicta in 1987 and canonized her in 1998.

• Additional material from the Saint of the Day, Leonard Foley, O.F.M.