Read: A Reflection upon Word of God Sunday by Jeremy Priest 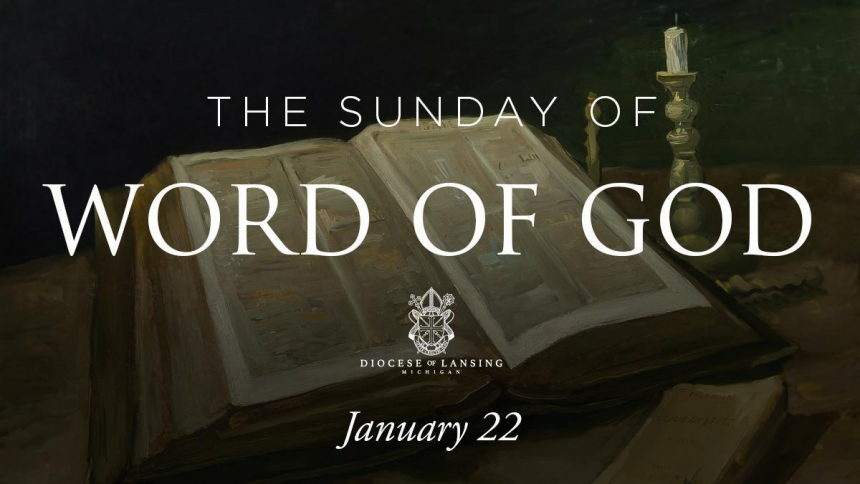 The Diocese of Lansing's Director of the Office of Worship, Jeremy Priest, now reflects upon the significance of Sacred Scripture in the lives of those who aspire to be faithful disciples of Jesus Christ. Jeremy writes:

God spoke! There’s almost nothing more riveting in the book of Genesis than this drama: eight times during the six days of creation we read these words: “And God said...” As Catholics, it’s sometimes commonplace to hear the Sacred Scriptures read at Mass and to give a humdrum, “Thanks be to God.”

On this “Sunday of the Word of God” we are invited to hear afresh and to tremble anew at the fact that God speaks to us!

In the prologue to his gospel, Saint John helps us see that speaking is not merely something God does: not only does God speak in the beginning; not only was the Word “with God” in the beginning… “the Word was God” (1:1)! In this vein, the Catholic novelist, Walker Percy, famously called God Deus Loquens, the “speaking God.” Indeed, the God who speaks the Word.

“In many and various ways God spoke of old to our fathers by the prophets, but in these last days he has spoken to us by a Son” (Heb 1:1). The Catechism of the Catholic Church teaches that even with all “the words of Sacred Scripture, God speaks only one single Word, his one Utterance in whom he expresses himself completely” (102).

This is why, above all, it is the Gospels that hold a singular place in the Church. As St. Josemaria Escriva wrote, “How I wish your bearing and conversation were such that, on seeing or hearing you, people will say: This man reads the life of Jesus Christ” (The Way, n. 2). Commenting on the unique value of the Gospels, St. Thérèse wrote, “But above all it’s the Gospels that occupy my mind when I’m at prayer; my poor soul has so many needs, and yet this is the one thing needful” (CCC 127).

Saint Thérèse found in the Sacred Scriptures the one thing needful because, “written under the inspiration of the Holy Spirit, they have God as their author” (Dei Verbum 11). Indeed, as Saint Paul teaches, all Scripture is “breathed out by God” or God-breathed (2 Tim 3:16)! And because Scripture is God-breathed speech, we can trust that “all that the inspired authors or sacred writers affirm should be regarded as affirmed by the Holy Spirit” (Dei Verbum 11).

Astonishingly, God continues to speak in the Scriptures: it is “in the sacred books, [where] the Father who is in heaven meets His children with great love and speaks with them” (Dei Verbum 25). Nevertheless, it takes effort and patience hear the Lord’s voice. Even the saints found this difficult; even the great Augustine:

When St. Augustine abandoned the teaching of rhetoric in Milan to enroll for baptism, he asked St. Ambrose, the bishop of Milan, what to read in the Scriptures “to make me readier and fitter to receive so great a grace”? Ambrose told him to read the prophet Isaiah. Augustine took his advice, but as soon as he took the book in hand he was perplexed by what he read. “I did not understand the first passage of the book,” he writes, and he thought “the whole would be equally obscure.” So Augustine laid it aside, as he explains, “to be resumed when I had more practice in the Lord’s style of language [in dominico eloquio].”[1]

So, on this Sunday of the Word of God, Pope Francis calls all Catholics to listen more deeply to God’s word and, like Saint Augustine, to become more accustomed to the Lord’s way of speaking.