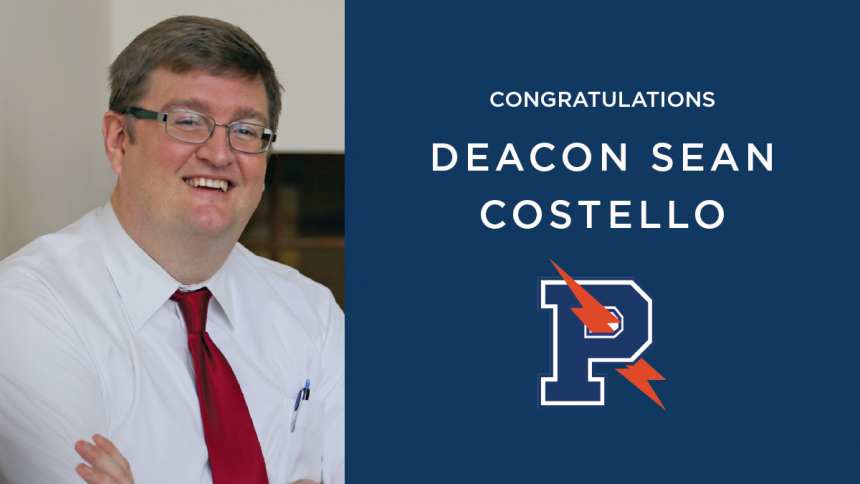 Congratulations to Deacon Sean Costello who has been announced as the new Principal of Powers Catholic High School in Flint, effective July 1, 2021.

“Powers Catholic has been blessed to have Deacon Costello share his academic and curricular knowledge while also sharing his faith experiences in and out of the classroom – I am confident that he will continue to set the expectation of excellence established by his predecessors,” said Rory Mattar, President of Powers Catholic High School, June 22.

Many families at Powers Catholic have already got to know Deacon Costello over the last three years as he has served at the school as a teacher and as part of their administrative team.

“Deacon Costello has been a great addition to the staff and he sincerely cares about the welfare of all students. He not only wants to prepare students for life after high school, but he also wants to help further their faith formation and their journey toward heaven,” added Rory Mattar.

Today’s appointment of Deacon Costello follows a full and extensive search by the school’s search committee followed by vetting and approval by President Mattar. Thus, Deacon Costello will become the sixth principal of Powers Catholic. He succeeds Principal Sally Bartos who moved on this month after faithfully serving the Powers Catholic community for over 23 years in a variety of roles.

Deacon Costello is married to Elisa, his beloved wife of 21 years. They have four children together, two of which are proud graduates of Powers.

“I am honored to serve and I ask that you pray for me in this transition,” said Deacon Costello in response to today’s announcement.

Congratulations Deacon Costello! Our Lady, Seat of Wisdom, pray for him!