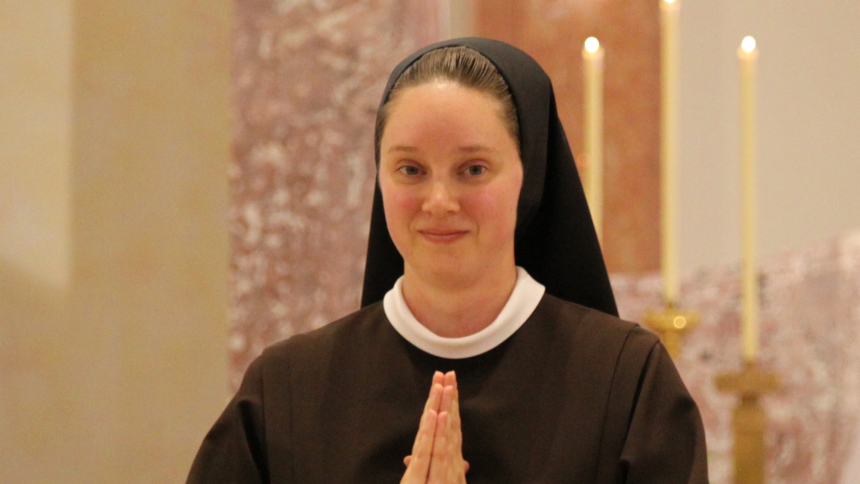 Meet Sister Evangeline Rutherford of the Sisters of St. Francis of Perpetual Adoration. 30-year-old Sister Evangeline hails from Saint Patrick Parish in Portland, Michigan. She is a graduate of Michigan State University and lived for two years at Emmaus House, the Diocese of Lansing women’s discernment house in East Lansing, before entering religious life in 2015. Here is her story of sisterhood:

“I didn’t really think about becoming a sister until after high school. My faith has always been important to me. I went to Mass every Sunday with my parents and brother. I went to Catholic school from kindergarten all the way through high school. When I was a sophomore in high school, I started to go to youth group. That following summer I went a Catholic summer youth camp and a youth conference at Franciscan University in Steubenville, Ohio. I did the same thing the summer after junior and senior year. These experiences really opened me up to the will of God for my life.”

“I remember at the end of the Steubenville conference the summer after my senior year, they had a ‘vocation call’. They called forward any young women who were thinking about becoming a sister in order to receive a blessing. I remember thinking to myself, ‘Why not you?’ I really didn’t have an answer. I stayed in my seat, but I think that is the first time I ever thought about religious life.”

“I then went to college at Michigan State University. I went to the student parish and met so many wonderful people. I started going to weekday mass, went on the retreat every semester, got involved in the women’s group, and many other things. During this time the call to religious life became stronger and stronger. At first it was terrifying to think about and it took me quite a while to get more comfortable with the idea. The call was not a onetime event, but rather an idea that was in the back of my mind and kept coming up. At the end of my sophomore year I finally went on a retreat for young women who were thinking about becoming sisters. I met some great sisters and the idea wasn’t as scary.”

“By the time I got to my senior year of college, I was pretty sure that God was calling me to be a sister. I lived in a house for women who were thinking about religious life. We had mass on Saturday mornings, ate together a few times a week, and prayed together every morning. I had some great friends and mentors who really helped me to talk through the idea of becoming a sister. I ended up finishing my degree in Clinical Laboratory Science and I went on to do my internship at a hospital in Saint Joseph, Michigan.”

“During my senior year there was a girl who came over to the house and prayed with us who was going to be joining the Sisters of Saint Francis of Perpetual Adoration. I got to know her that year and came to her entrance ceremony. This was the first time that I met my sisters. Little did I know that this was where I would be entering two years later.”

“After my internship, I moved to Indianapolis. I wanted to move to a bigger city and work at and it happened to work out that I got a job at the hospital run by the sisters. I worked at Franciscan Health Indianapolis for a year and a half. During my time in Indianapolis, I still felt the call to religious life. I finally realized that I just needed to go for it. I had thought about it long enough. I had gone on a retreat with the sisters right after my friend had entered and had a good experience, so I decided that this was where I needed to start. I sent an email and scheduled a visit. I told God that I wanted to hear the song ‘King of Love my Shepherd Is’ and then I would know this is where He wanted me to be. I got to the convent in time for the evening holy hour. After the rosary we started Evening Prayer, which begins with a hymn. It was the song. I took my application papers back with me. In addition to hearing the song I had a lot of peace and felt at home with the sisters. I entered in the fall of 2015.”

“I am currently working at Franciscan Health Indianapolis in the laboratory, again! The Lord definitely has a sense of humor. The call to religious life is such a gift. There are difficult days and moments, but the call has just gotten deeper over the years and I couldn’t imagine doing anything else.”

* Do you feel that God may be calling you to Consecrated Life? Contact Dawn Hausmann, Director of Consecrated Vocations for the Diocese of Lansing, at dhausmann@dioceseoflansing.org or 517-342-2506.