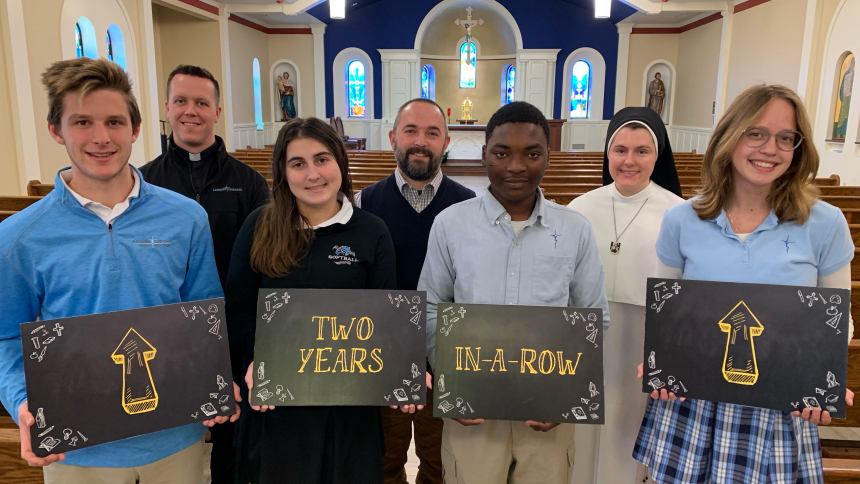 Catholic Schools across the Diocese of Lansing have recorded year-on-year growth in student numbers for the first time in more than two decades with enrollment growing by 8% over the past two years. Deo gratias.

“This is Discover Catholic Schools Week and, certainly, these latest enrollment numbers suggest that more and more families across the Diocese of Lansing are discovering our schools and liking what they find in terms of culture, curriculum and community,” says Tom Maloney, Superintendent of Catholic Schools for the Diocese of Lansing, November 15, Feast of Saint Albert the Great.

“Thank you to all the staff, families and students who pray and work so hard throughout the year to make our schools boldly Catholic and academically rigorous – may God continue to bless your endeavors in the year to come.”

The largest annual increase in enrollment is to be found in early years with a 15% rise in pre-kindergarten student numbers. The total number of students in all years rose by 3% over the past year with 24 of 35 schools witnessing increased enrollment. That includes three out of four diocesan regional high schools. This year’s figures build upon last year’s 6% rise in enrollment. Many schools report an influx of students from the public school system.

“Importantly, that includes partnering with the family so as to reinforce the values of the home and it’s that vision, and that partnership, that are reinvigorating our understanding of Catholic education and really starting to make a difference in terms of enrollment.”

In a continuing effort to make a Catholic education more affordable, this year saw the Diocese of Lansing institute a new scholarship aimed at helping Hispanic families access Catholic schools. In its first year, the Saint Sanchez del Rio Scholarship awarded $54,000 to families in need. The fund operates under the patronage of Saint Sanchez del Rio (1913-1928), a Mexican teenager who was put to death by government officials because he refused to renounce his Catholic faith.

This new scholarship bolsters the already-existing Venerable Augustus Tolton Scholarship which aims to increase the number of Catholic African American students in the Diocese of Lansing’s schools.

• Want to know more about a Catholic education for your child or grandchild? Go to https://dolcatholicschools.org/