Long Read: Saint Robert Bellarmine | "A Saint for Our Times" by Brian Flynn 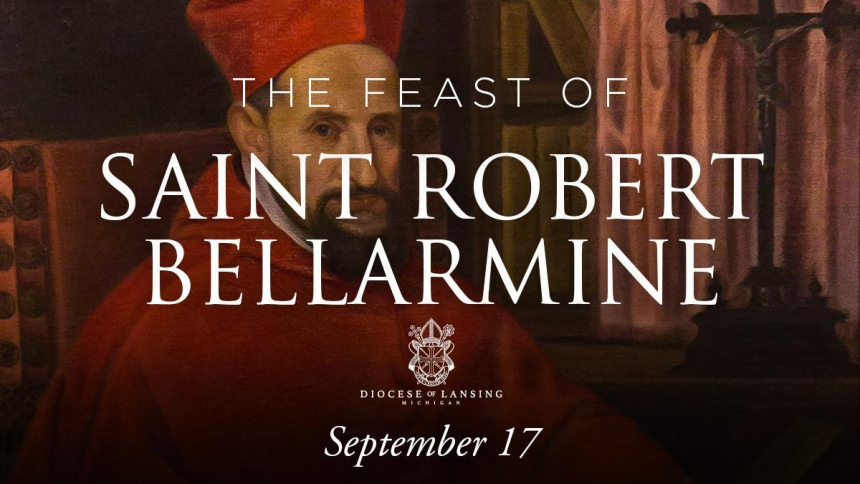 Today is the Feast of Saint Robert Bellarmine (1542 – 1621) was an Italian Jesuit one of the most important figures in the Counter-Reformation. He was canonized a saint in 1930[1] and named Doctor of the Church. Happy feast day!

Brian Flynn of the Diocese of Lansing's Office of Parish Youth Discipleship believes that Saint Robert, who is patron saint of catechists, is very much a saint for our time due to his humility, charity, courage and fidelity. Here's what Brian has to say:

St. Robert Bellarmine was born in Montepulciano, Italy in 1542. He lived for 79 years at a time when the average life expectancy was only about 45 years. He died in 1621. Though small in stature at about five feet tall, he had an enormous impact on the Catholic Church. St. Robert was known to be an amazing preacher, and numerous conversions reportedly took place upon hearing his words. Allegedly he had the gift of prophecy and several events he suggested would take place came to pass. Partially due to his personality but also because of obedience to his Jesuit vow of poverty, he shunned awards and notoriety. However, throughout his life St. Robert was consistently elevated to positions of ecclesiastical and academic leadership. He was consecrated a Bishop, then Archbishop, then Cardinal, as well as Chair of the Office of Controversial Theology at the Roman College. (Now known as the Gregorian University) Because of his brilliant mind and charitable, unwavering demeanor, Bellarmine was also tapped to deliver the news to the famous scientist, Galileo, that his views on certain scientific matters were not compatible with Church teachings. St. Robert lived and rose to prominence during the renaissance and the Protestant Reformation, at a time when the Catholic Church was being attacked and challenged. Church membership was in decline while many who were still practicing were lax or ineffectively catechized in the Church’s teachings. St. Robert was preaching, teaching, and writing in the years following the close of the Council of Trent and worked tirelessly to promote and implement those reforms. He is known as one of the key figures in the counter-reformation.

In 1930, St. Robert was declared a Doctor of the Church by Pope Saint Pius XI. There is much we can learn from St. Robert as we strive to live out and defend the Faith in our time. We, too, live in a time when participation in the Faith is in decline, the Church and Her teachings are under attack, and many people still need to be catechized to be able to pass on the basic tenets of our Faith. We also find ourselves living in a post-conciliar era when the reforms of the Second Vatican Council are yet to be fully implemented.

The virtues of humility, courage, charity, and fidelity that made Robert Bellarmine one of the leading figures of the counter-reformation provide a roadmap for our own discipleship and indeed, our sanctity. As the Patron Saint of Catechists, these virtues are particularly inspiring for those who work to catechize in our homes, parishes and schools.

As a young boy, St. Robert was used to having little. His family was not very well off, and he was accustomed to a simple life. When discerning the priesthood and religious life, he was urged by his father to consider the Dominican order, which carried a lot of prestige and esteem as well as lofty appointments. St. Robert answered that this is exactly why he was drawn to become a Jesuit. At that time, the Jesuits were a relatively new order, adhering to their vows of poverty and refusing to accept any worldly honors or allurements. Beyond his humility related to material and worldly goods, St. Robert’s very demeanor exuded humility in his preaching, writing and interactions with those around him, including those with whom he debated the Faith. Though St. Robert avoided being put on a pedestal at all costs, certain superiors and even popes elevated him to various roles and appointments of prestige throughout his life as his reputation continued to grow. At one point, St. Robert was introduced to another young Jesuit, named Aloysius Gonzaga. He was a sickly young man who would die at age 23, but in his short life had a deep grasp of the spiritual life. St. Robert was so taken by Aloysius’ holiness that he requested to be buried below Aloysius’ feet when he died. St, Robert, help us to be humble!

St. Robert was known to give much of his material possessions to the poor. In one case he was assigned at a house with fancy tapestries on the walls. In a show of both his humility and charity, he gave the tapestries to the poor to sell so they could buy what they needed, saying “the walls can’t catch cold.” He is quoted as saying, “The school of Christ is the school of charity. On the last day, when the general examination takes place, there will be no question at all on the text of Aristotle, the aphorisms of Hippocrates, or the paragraphs of Justinian. Charity will be the whole syllabus.”

Further, charity is one reason St. Robert was so effective at evangelizing and defending the Faith. The era of the reformation and counter-reformation was known to be a time of deep division and vitriol. St. Robert was gifted with the ability to discourse without breaking the laws of charity, respecting those whom he encountered. He never used ridicule or anger towards his opponents in debate, but rather treated them each with charity, dignity, and respect and thus was able to win hearts and minds. St. Robert, help us to be charitable!

Preaching, teaching, and writing during the counter-reformation certainly took courage. One area where St. Robert displayed courage was in refuting King James I and the so-called “Divine Right of Kings;” an attitude of the day expressing that kings were divinely appointed, even more so than the pope. Instead, St. Robert claimed that sovereign power resides in actual people, and that government only receives its power as a grant from human persons. (If this language sounds familiar, it is because many scholars believe that the founding fathers of our country were influenced by the thought of St. Robert!) Another courageous endeavor of St. Robert was in writing his famous “Disputations about Controversies of the Christian Faith against the Heretics of this Age,” first published in 1581. Herein, St. Robert hand picked many of the challenges and controversies of the age. It is said that Bellarmine studied the Protestant positions on these topics in order to dismantle them and defend the true teachings of the Church. And yet, St. Robert courageously proceeded knowing that calling certain positions heretical and promoting other teachings would open himself up to personal attacks against his reputation. St. Robert, help us to be courageous!

St. Robert was known to be a very loyal, obedient, and faithful man. His story is marked with many examples of his fidelity to his parents, his superiors, popes, and to the Church. Though it seems he would have been content to preach, teach, and write, he showed his fidelity by humbly accepting responsibilities and appointments in various ways. One comical example of his fidelity is when he was sent to the Piedmont region in Northern Italy to teach Greek at one of the Jesuit houses of formation. The problem was… he didn’t know Greek. He faithfully accepted the assignment, beginning by reviewing the Greek alphabet as he himself was learning it. He then managed to stay one assignment ahead of his students while he studied late into the night, eventually becoming proficient in Greek. Another example is in his fidelity to his vocation. He took his priesthood very seriously. In those days, many priests rarely said Mass. This baffled St. Robert, whose love for the Lord in the Eucharist drove him to say Mass as often as possible. Still another example of his fidelity to the Church was in accepting the assignment to update the text of the Latin Vulgate bible. In response to the Protestant Reformation the Church needed an accurate translation of the scriptures for scholars to be able to refute attacks against Her. Pope Sixtus V attempted to update the bible himself but in addition to his version being ripe with errors, he died before it’s completion. Pope Clement VIII then asked St. Robert to take on this updated version of the Latin Vulgate, the Preface of which was still in use in recent years. This is important because the scriptures were translated into other languages from the Latin Vulgate, and so accuracy was paramount. This further highlights the fidelity of St. Robert to the truth and to the Church. St. Robert, help us to be faithful!

St. Robert, Patron of Catechists, pray for us!