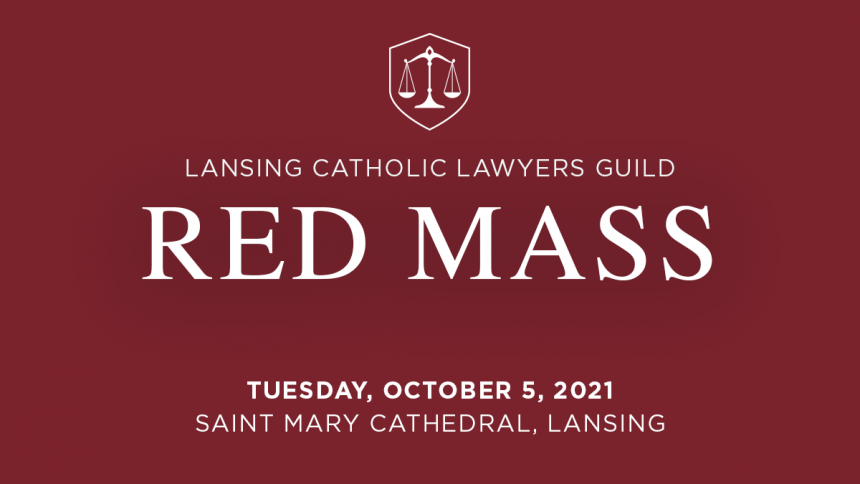 For nearly nine centuries, the celebration of the Red Mass has served to invoke the blessing of the Holy Spirit on the works of the courts in the new term.

The Red Mass will be followed by dinner at Saint Mary’s Parish Hall, adjacent to the Cathedral. The Catholic Lawyers Guild of the Diocese of Lansing, desirous of advancing among its members those ideals of service and sacrifice in pursuit of justice which are reflected so conspicuously in the life of our patron, St. Thomas More, publicly gives tribute to Richard Thompson, President and Chief Counsel of the Thomas More Law Center.

Some of his accomplishments include: successfully defending the constitutionality of Michigan’s Mandatory Life Law for major drug dealers in the United States Supreme Court, creating the state’s first Child Sexual Assault Crimes Unit, and developing one of the nation’s toughest no pleas bargaining policies - which achieved a 98 percent conviction rate.

At the Thomas More Law Center, Mr. Thompson directs a highly professional and aggressive team of lawyers dedicated to the defense and promotion of the religious liberty of Christians, time-honored family values, the sanctity of human life and a strong national defense.

The Guild invites everyone to join us for an enjoyable evening. Please RSVP by Friday, October 1, 2021 by sending the registration form with payment to the Catholic Lawyers Guild, c/o Diane Arzberger, Executive Director at the address provided on the registration form. The event is subject to modification or cancellation in accordance with public health guidance.

Very truly yours in Christ,