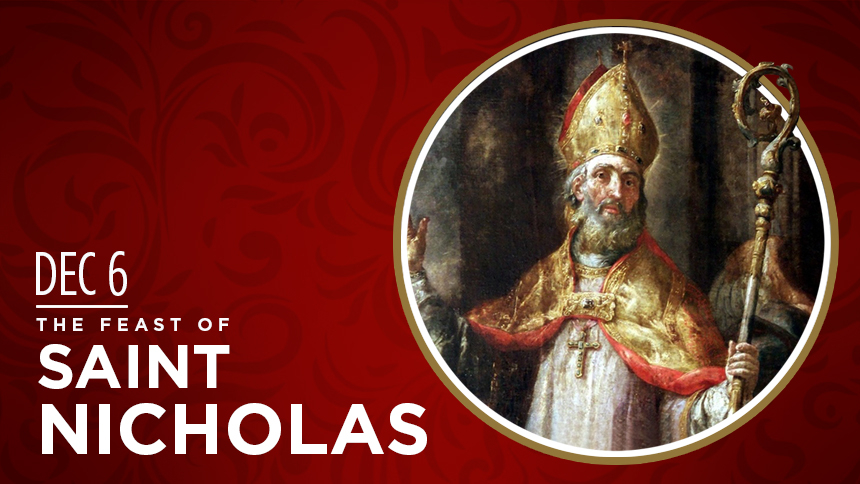 Tomorrow is the Feast of St. Nicholas, the day when many Christian children awaken to find that the kindly 4th century saint has visited their home overnight and deposited gifts, often candy, in their shoe!

“These venerable Catholic traditions which celebrate saints days, such as the Feast of St. Nicholas, are a lovely way to introduce our children to the truths and traditions of the Catholic faith and also to a life of prayer in union with the whole family” said Richard Budd, Director of Marriage and Family Life for the Diocese of Lansing, December 5.

Saint Nicholas of Myra (270 –343), also known as Saint Nicholas of Bari, was an early Christian bishop of the ancient Greek maritime city of Myra in Asia Minor (modern-day Demre in Turkey) during the time of the Roman Empire. During his lifetime he developed a reputation for gift-giving by putting coins in other people's shoes, which accounts for many of today's Christmas traditions that involve leaving gifts in shoes or boots.

A graduate of the Pontifical John Paul II Institute in Washington, D.C., Richard Budd recalls how each year he would play the role of St. Nicholas for the children of one of his academic professors.

“The parents had a costume made of St. Nicholas in full episcopal regalia,” explained Richard, “and, so, each year, upon the eve of the Feast of St. Nicholas, I would dress up and walk into their home where the children were waiting, I would then preach to them about the love of Christ and encourage them to live exemplary lives as children who are awaiting the Lord at Christmas.”

“I then promised I would return later in the evening with treats to leave in their shoes, in return the children would then give me painted pictures or written letters to deliver to the Baby Jesus upon my return to heaven. We’d then pray together, they’d sing me a song and then I’d leave!”

St. Nicholas is referred to by many names throughout Europe such as Sinterklaas in the Netherlands or Nikolaus in Germany and is the inspiration for the figure of the North American Santa Claus and the British Father Christmas. St. Nicholas, pray for us!