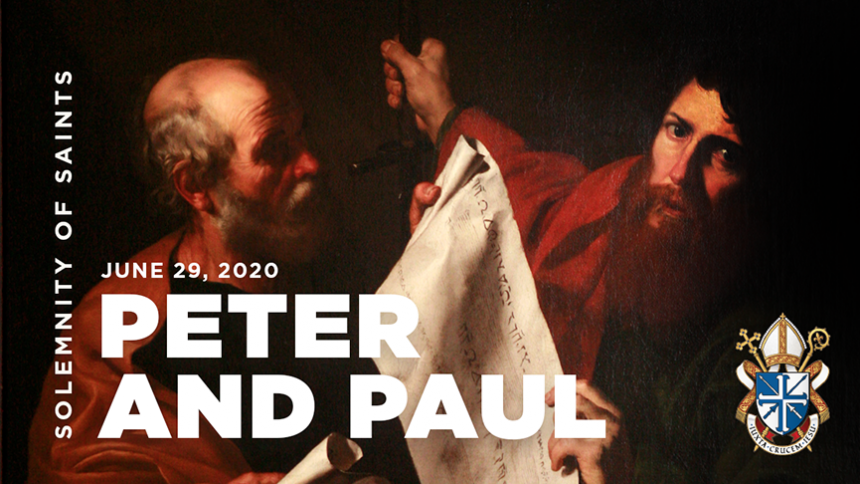 Today is the Solemnity of Saints Peter and Paul. Happy Feast Day! Both St. Peter and St. Paul were martyred in 1st century Rome. Peter was crucified. Paul was beheaded. Both are now buried within Papal Basilicas in the Eternal City.

To mark today’s feast day, we asked seminarian Peter Ludwig, who is studying for the holy priesthood for the Diocese of Lansing at the North American College in Rome, to explain how it feels to live, study and pray in such close proximity to the two great Apostles of the Roman Church. Here is what “our man in Rome” had to say:

“Living in Rome provides the unique opportunity to regularly visit the tombs of St. Peter and St. Paul. The tomb of St. Paul is a greater distance from the North American College, but is well worth the commute. St. Paul’s tomb is underneath the altar of a massive basilica—St. Paul Outside the Walls. A glass case near the tomb contains the remnants of St. Paul’s chains. Those chains held St. Paul’s body, but they never stopped the Gospel he preached. Praying near that tomb, I am struck by Paul’s transformation from the worst of sinners to the greatest of evangelists. The Christians of today face new chains, new obstacles to preaching the Gospel. Looking at the chains of St. Paul, I am reminded that the chains Christians face can never hold back the Gospel if we, like St. Paul, allow the Holy Spirit full reign in our lives. These chains are put to shame, becoming a symbol of Christ’s victory over all things.”

“The tomb of St. Peter rests underneath the altar of the largest basilica in the world—St. Peter’s Basilica. The sheer size of that basilica inspires awe and attracts tourists from around the world. At the very center of attention is the altar resting over the remains of St. Peter. The striking story of a sinful Galilean fisherman becoming a vessel of God’s mercy stirs the Christian mind and heart. Now surrounded by magnificent art and architecture, the memory of that humble fisherman draws enormous numbers of tourists and pilgrims closer to Christ every year. The “tourist attraction” of St. Peter’s Basilica can never be separated from the man who died upside-down on a cross a stone’s throw from the basilica walls. Peter died a brutal death at the hands of Nero to testify to the love of Jesus Christ. That testimony lives in the very stones of that magnificent church, but even more so in the Church that Christ founded upon the rock of Peter. Peter was not a rock because he was strong and holy. Peter was a rock because he himself was founded on the rock of Jesus Christ, who is strong and holy. Every visit to St. Peter’s should remind the pilgrim that even a sinful Galilean fisherman can become a foundation stone if that sinner finds his own foundation in Christ.”

Thank you Peter. Do have a very happy and holy feast day! Saints Peter and Paul, pray for us!