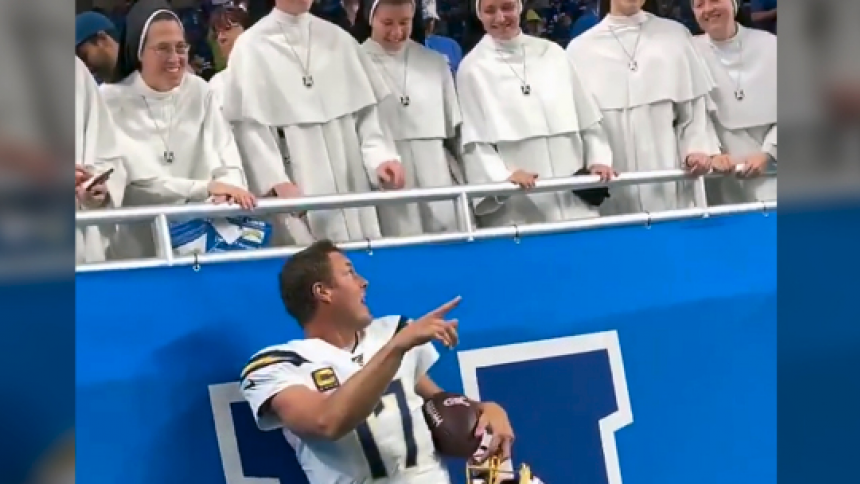 Here’s the lovely moment when San Diego Chargers' quarterback Philip Rivers took to the field against the Detroit Lions on their home turf this past weekend only to spot some friendly faces in the crowd – the Dominican Sisters of Mary, Mother of the Eucharist, from Ann Arbor.

“The Sisters were grateful to attend the game – Philip Rivers is a devout Catholic, man of virtue, and a leader on and off the football field,” said spokeswoman for the order, Monica Fitzgibbons, 17 September.

“We were blessed to be able to honor him with the St. Dominic Award at an event in honor of our Spiritus Sanctus Academies in 2015.”

Rivers is an old friend of the order, which was founded in 1997, by four Sisters whose mission was to establish a new religious community that combined their Dominican monastic heritage with their commitment to the New Evangelization.

In only 20 years, the community has grown to over 140 Sisters with an average age of 32 years old. Their youth, inspiring faith, and infectious enthusiasm even drew the attention of Oprah, who featured them twice on her show in 2010 and then, because the shows were so popular, five years later she had them on again for a “where are they now?” show.

Along with his wife Tiffany, Rivers has been a supporter of the community since 2012, and, as previously mentioned, in 2015 the Sisters awarded him their Medal of St. Dominic award recognizing his life of service and faith, highlighting the seriousness which he sees himself as a role model, his charity work with abandoned and orphaned children, and for serving as a proponent of chastity and natural family planning. He and his wife welcomed their ninth child in March of 2019.

Known for attending Holy Mass before every game, upon receiving an honorary degree from The Catholic University of America in 2014, he told the assembled that his priorities, were faith, family, and football – “in that order”.

While Rivers’ visit with the Sisters didn’t manage to help him beat the Lions, who won 13-10, it certainly goes down as a win in our book.